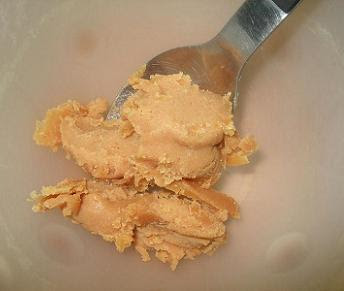 Miso is a traditional Japanese seasoning produced by fermenting rice, barley and soybeans, with salt and the fungus. Depending to the time required for fermentation, it is classified into difference types of miso. Since it contains high amount of in protein, vitamins and minerals, it now becomes increasingly popular in the West.

2. Obesity
In the investigation of a Fermented Soybean Paste and its anti obese effect found that fermented soybean product, was more effective than soybeans for preventing diet-induced visceral fat accumulation, possibly because of its greater effects on CPT-1 activity stimulation and FAS activity suppression. These effects may be due in part to the higher content of aglycone isoflavones in doenjang, according to "Doenjang, a Fermented Soybean Paste, Decreased Visceral Fat Accumulation and Adipocyte Size in Rats Fed with High Fat Diet More Effectively than Nonfermented Soybeans" by Kwak CS, Park SC, Song KY.(b)

3. Breast cancer
In the observation of high concentration of isoflavones and peptides of fermented soybeanand theirs effect in breast cancer wrote that based on the experimental results, taking fermented soybean might be helpful for preventing breast cancer by a mechanism activating TGFβ pathway and depressing inflammation, according to "Inflammation-related signaling pathways implicating TGFβ are revealed in the expression profiling of MCF7 cell treated with fermented soybean, chungkookjang" by Hwang JS, Yoo HJ, Song HJ, Kim KK, Chun YJ, Matsui T, Kim HB.(c)

4. Antioxidant activity
In the assessment of a Chinese traditional fermented product of soybean and its antioxidant effect found that taking into account of extraction yields, the sufu product ripened at 45°C for 16 days showed the most profound enhancement in the DPPH radical-scavenging effect and Fe(2+)-iron-chelating ability, which is 3.4 and 11.5 folds, respectively, that noted with the non-fermented tofu, according to "Fermentation temperature affects the antioxidant activity of the enzyme-ripened sufu, an oriental traditional fermented product of soybean" by Huang YH, Lai YJ, Chou CC.(d)

6. Etc.
B. Health benefits according to concentration
1. Tryptophan
Tryptophan is one of the 10 essential amino acids which the body uses to synthesize the proteins for brain cells need, thus enhancing the nerve cells in information transmitting between themselves and cells in the parts of the body that reduces the risk of anxiety and depression, according to the study of "The effects of tryptophan depletion on neural responses to emotional words in remitted depression" by Roiser JP, Levy J, Fromm SJ, Nugent AC, Talagala SL, Hasler G, Henn FA, Sahakian BJ, Drevets WC.(1)

2. Manganese
Manganese beside plays an vital role for the proper and normal growth of human bone structure (accodring to the study of "Bone formation within alumina tubes: effect of calcium, manganese, and chromium dopants" by Pabbruwe MB, Standard OC, Sorrell CC, Howlett CR., posted in PubMed (http://www.ncbi.nlm.nih.gov/pubmed/15109850)), it also helps to reduce the risk of cancer, (according to the study of "The effects of 3, 4 or 5 amino salicylic acids on manganese-induced neuronal death: ER stress and mitochondrial complexes" by Yoon H, Lee GH, Kim DS, Kim KW, Kim HR, Chae HJ., posted in PubMed (http://www.ncbi.nlm.nih.gov/pubmed/21477646 researchers indicated that the salicylate analogues and the antioxidants did not mediate ER stress in this model. The salicylate analogues reduced reactive oxygen species (ROS) and reversed the deficient mitochondrial membrane potential that was induced by Mn. Taken together, the 3, 4, 5 ASA worked in a similar way, regulating the Mn-induced mitochondrial dysfunction and protecting cells.

3. Vitamin K
Vitamin K not only plays an important role in protecting our skin from aging, it is also needed for the proper clotting of blood, thus decreasing the risk of excessive bleeding, in a study of "Delayed vitamin K deficiency as a cause of bleeding: still a concern in the 21st century!" by Kasatkar P, Shetty S, Ghosh K., posted in PubMed, researchers found that Laboratory tests confirmed acquired bleeding diathesis due to vitamin K deficiency, which was corrected after adequate vitamin K supplementation. VKDB is not an uncommon phenomenon and should be considered in the differential diagnosis of a child with bleeding diathesis.

4. Protein
In the evaluation of soy protein diet abd it effects on serum creatinine, found that soy feeding was associated with higher renal and hepatic linoleic acid content and higher hepatic alpha-linolenic acid, but lower hepatic arachidonic acid content. and concluded that Isocaloric soy protein feeding ameliorates both epithelial and interstitial changes in the Han:SPRD-cy rat independent of a hypocholesterolemic effect. The histologic benefit is associated with changes in polyunsaturated fatty acid metabolism that may influence both inflammatory and proliferative pathways, according to the study of "Modification of polycystic kidney disease and fatty acid status by soy protein diet" by Ogborn MR, Nitschmann E, Weiler HA, Bankovic-Calic N.(4)

C. Other health benefits
1. Antiging
Vitamin K beside is essential to the coagulation of blood by stopping the skin from bleeding after wound or cut, it also helps to protect the under layer of the skin against leaking due to aging, depending to the level of vitamin K-dependent coagulation factors, according to the study of "The pharmacology of oral anticoagulants: implications for therapy" Shetty HG, Woods F, Routledge PA., posted in PubMed (http://www.ncbi.nlm.nih.gov/pubmed/8269110), researchers indicated that a number of factors such as altered absorption, distribution, elimination, genetic factors, aging, vitamin K excess or deficiency, alterations in the level of vitamin K-dependent coagulation factors and drug interactions may affect response to oral anticoagulants. Adverse effects include hemorrhage, skin necrosis and teratogenicity. Phenindione can also cause serious hypersensitivity reactions.

2. Omega 3 fatty acid
Beside is important to reduce the over reaction of the abdominal muscle by balancing the ratio of omega 3 and 6 fatty acid, omega 3 fatty acid also helps to increase the good cholesterol HDL in the blood stream, thus reducing the risk of hypertension causes of heart diseases., according to the study of "Effects of Omega-3 Fatty Acids on Serum Lipids, Lipoprotein (a), and Hematologic Factors in Hemodialysis Patients" by Kooshki A, Taleban FA, Tabibi H, Hedayati M., posted in PubMed (http://www.ncbi.nlm.nih.gov/pubmed/21859401)

3. Bone heath
Magnesium beside plays an important in stabilizing the heart rhythm and prevents the abnormal blood clotting in the heart ( according to the study of "Dietary magnesium deficiency induces heart rhythm changes, impairs glucose tolerance, and decreases serum cholesterol in post menopausal women" by Nielsen FH, Milne DB, Klevay LM, Gallagher S, Johnson L., posted in OubMed, (http://www.ncbi.nlm.nih.gov/pubmed/17536123)), it also helps to maintain the ratio of calcium, thus enhancing the body in calcium absorption in building healthy bone (according to the study of "A moderately high intake compared to a low intake of zinc depresses magnesium balance and alters indices of bone turnover in postmenopausal women" by Nielsen FH, Milne DB., posted in PubMed (http://www.ncbi.nlm.nih.gov/pubmed/15116072)).

5. Iron
Iron, the trace minerals, is not only important to reduce the implication of oxidative stress and cardiovascular health (according to the study of "[Iron deficiency and overload. Implications in oxidative stress and cardiovascular health].[Article in Spanish]" by Toxqui L, De Piero A, Courtois V, Bastida S, Sánchez-Muniz FJ, Vaquero MP., posted in PubMed, (http://www.ncbi.nlm.nih.gov/pubmed/20593115) it also helps in production of red blood cells and formation of hemoglobin which enhances the absorption oxygen from the lung to nourish the cells in the body.

Side effect
1. It contain a measure amount of sodium but you can choose with less
2. Since it has soybean as an ingredient, it may cause allergic effect.