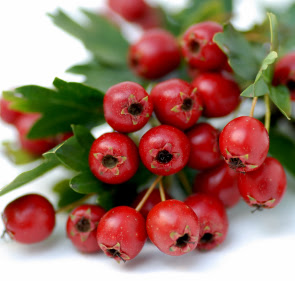 Hawthorn is a shrubs and trees of the genus Crataegus, belonging to the family Rosaceae, native to temperate regions of the Northern Hemisphere in Europe, Asia and North America. The herb has been used in traditional medicine to treat heart disease and symptoms of heart diseases such as irregular heartbeat, high blood pressure, chest pain, hardening of the arteries, etc., circulatory disorders and respiratory illnesses.

Heath benefits
1. Hypotensive effects
In the investigation of Hawthorn (Crataegus laevigata) leaves, flowers and berries used by herbal practitioners in the UK to treat hypertension in conjunction with prescribed drugs indicated that this is the first randomised controlled trial to demonstrate a hypotensive effect of hawthorn in patients with diabetes takin, according to "Hypotensive effects of hawthorn for patients with diabetes taking prescription drugs: a randomised controlled trial" by Walker AF, Marakis G, Simpson E, Hope JL, Robinson PA, Hassanein M, Simpson HC(1)

2. Cardiac effects
In the evaluation of the potential cardiac effects of two alcohol extracts of commercially available hawthorn found that the mechanism of cardiac activity of hawthorn is via the Na(+),K(+)-ATPase and intracellular calcium concentrations are influenced, according to "A comparison of the effects of commercially available hawthorn preparations on calcium transients of isolated cardiomyocytes" by Rodriguez ME, Poindexter BJ, Bick RJ, Dasgupta A.(2)

3. Cardiovascular disease
In the analyzing the effect of hawthorn in prevention and protection of cardiovascular disease indicated that these beneficial effects may in part be due to the presence of antioxidant flavonoid components. While a number of studies have been performed to evaluate the clinical efficacy of hawthorn, an international, multicenter, prospective clinical study including a large number of New York Heart Association (NYHA) class II/III heart failure patients is ongoing to test hawthorn's long-term therapeutic effects, according to "Hawthorn: potential roles in cardiovascular disease"by Chang WT, Dao J, Shao ZH.(3)

5. Hyperlipemia
in the determination of The Yishoujiangzhi (de-blood-lipid) tablets (composed of Radix Polygori Multiflori, Rhizoma Polygonati, Fructus Lycii, Crataegus Pinnatifida and Cassia Tora) and its effect on Hyperlipemia found that in the treatment of 130 cases of hyperlipemia, achieving an effective rate of 87.0% in lowering serum cholesterol and 80.8% in lowering triglyceride, according to 'Yishou jiangzhi (de-blood-lipid) tablets in the treatment of hyperlipemia" by Guan Y, Zhao S.(5)

7. Neuroprotective effects
In the investigation of the neuroprotective effects on PC12 cells from the methanol extracts of Spatholobus suberectus, Uncaria rhynchophylla, Alpinia officinarum, Drynaria fortunei, and Crataegus pinnatifida found that The CPE, SSE, and URE presented neurogrowth effects and neuroprotective activities on H(2)O(2)-induced PC12 cell death at 0.5-5.0 μg/mL. The CPE represents a promising medicinal plant source for the treatment of H(2)O(2)-induced neurodegenerative disease, because of its useful phytochemical characteristic, according to "Phytochemical characteristics, free radical scavenging activities, and neuroprotection of five medicinal plant extracts" by Chang CL, Lin CS, Lai GH.(7)

9. Antithrombotic effects
in the investigation of Antithrombotic function of ethanol extract of Crataegus orientalis (COE) leaves found that 200 mg/kg COE lost its significance and there was a decrease in the significance values of 300 mg/kg COE (p<0.05) at 48 and 72 h. From these results, it was concluded that COE significantly inhibited carrageenan-induced mice tail thrombosis in vivo, according to "Antithrombotic effects of ethanol extract of Crataegus orientalis in the carrageenan-induced mice tail thrombosis model" by Arslan R, Bor Z, Bektas N, Meriçli AH, Ozturk Y.(9)

10. Anti-inflammatory, gastroprotective and antimicrobial activities
In the observation of the effect of hawthorn berries ethanol extract and its free-radical-scavenging, anti-inflammatory, gastroprotective, and antimicrobial activities found that Oral administration of investigated extract caused dose-dependent anti-inflammatory effect in a model of carrageenan-induced rat paw edema. The obtained anti-inflammatory effect was 20.8, 23.0, and 36.3% for the extract doses of 50, 100, and 200 mg/kg, respectively. In comparison to indomethacin, given in a dose producing 50% reduction of rat paw edema, the extract given in the highest tested dose (200 mg/kg) showed 72.4% of its activity. Gastroprotective activity of the extract was investigated using an ethanol-induced acute stress ulcer in rats with ranitidine as a reference drug. Hawthorn extract produced dose-dependent gastroprotective activity (3.8 +/- 2.1, 1.9 +/- 1.7, and 0.7 +/- 0.5 for doses of 50, 100, and 200 mg/kg, respectively), with the efficacy comparable to that of the reference drug. Antimicrobial testing of the extract revealed its moderate bactericidal activity, especially against gram-positive bacteria, according to "Anti-inflammatory, gastroprotective, free-radical-scavenging, and antimicrobial activities of hawthorn berries ethanol extract" by Tadić VM, Dobrić S, Marković GM, Dordević SM, Arsić IA, Menković NR, Stević T.(10)

11. Prevention and treatment of cataracts
In the evaluation of the anticataract potential of Crataegus pinnatifida (hawthorn tree) leaves and its extract in selenite-induced cataract in vivo and antioxidant effects in vitro, found that administration of C. pinnatifida leaves extract eye drops alternately three times a day in rat pups with selenite-induced oxidative stress significantly increased serum SOD and CAT activities, and tended to reduce MDA level compared with control group. The antioxidant enzyme SOD, CAT, and GSH activities in lens showed a significant increase. These results may be applied in the future for the prevention and treatment of cataracts, according to "Prevention effect in selenite-induced cataract in vivo and antioxidative effects in vitro of Crataegus pinnatifida leaves" by Wang T, Zhang P, Zhao C, Zhang Y, Liu H, Hu L, Gao X, Zhang D.(11)