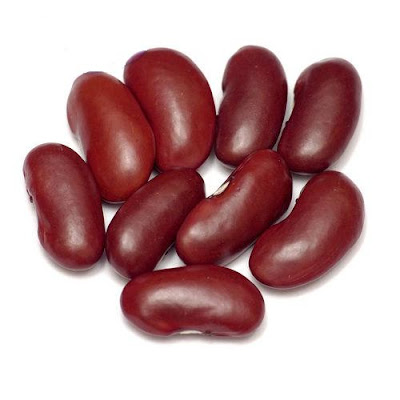 Kidney bean is popular because of its kidney shape, strong flavor and color that is reddish brown in nature, genus Phaseolus, belong to the family Fabaceae. It is often an excellent dietary selection with no cholesterol, but a good source of protein and minerals.

Health benefits
A. Health benefits according to studies
1. Hypoglycaemic and anorexigenic activities
In the assessment of alpha-amylase isolated and purified from an extract of white kidney beans (Phaseolus vulgaris) and its Hypoglycaemic and anorexigenic activities indicated that the present study has shown, for the first time, that the prolonged administration of an alpha-amylase inhibitor reduces blood glucose levels and body-weight gain in Wistar rats, according to "Hypoglycaemic and anorexigenic activities of an alpha-amylase inhibitor from white kidney beans (Phaseolus vulgaris) in Wistar rats" by Tormo MA, Gil-Exojo I, Romero de Tejada A, Campillo JE.(a)

2. Leukemia
In the observation of a 67-kDa hemagglutinin composed of two identical subunits was purified from Phaseolus vulgaris cv. 'Dark Red Kidney Bean and its effect in mitogenic activity found that the hemagglutinin exhibited mitogenic activity toward murine splenocytes, it had no effect on the activity of HIV-1 reverse transcriptase or mycelial growth in the fungi Botrytis cinerea, Fusarium oxysporum and Mycosphaerella arachidicola. It exerted an antiproliferative activity on leukemia L1210 cells, according to "A hemagglutinin with mitogenic activity from dark red kidney beans" by Xia L, Ng TB.(b)

B. Health benefits according to the concentration
1. Molybdenum
Molybdenum beside helps in producing energy, processing waste substances and neutralizing toxic effects of sulphites, it also improves the properly functioning of fat, carbohydrates, copper, and nitrogen metabolism, according to the article of "Molybdenum Aids Fat and Carbohydrate Metabolism", posted in Nutra Legacy)

2. Folate
Folate beside is important for the production of red blood cells, and for the proper development of the brain, it also helps to enhance the replication and maintain DNA and RNA, thus reducing the risk of birth defects, in a study of "Go folic!" by Bland J., posted in PubMed, researchers state that in order to prevent neural tube defects (NTDs), and proactively prevent new cases of spina bifida and hydrocephalus, it is essential that women take folic acid well before becoming pregnant. Through the use of social networks, and the voice of healthcare professionals, it is hoped that more women than ever before will receive the Go Folic! message and start taking the 400mcg/day required to ensure the development of a healthy brain and spine.

3. Tryptophan
Tryptophan is one of the 10 essential amino acids which the body uses to synthesize the proteins for brain cells need, thus enhancing the nerve cells in information transmitting between themselves and cells in the parts of the body that reduces the risk of anxiety and depression, according to the study of "The effects of tryptophan depletion on neural responses to emotional words in remitted depression" by Roiser JP, Levy J, Fromm SJ, Nugent AC, Talagala SL, Hasler G, Henn FA, Sahakian BJ, Drevets WC.(1)

4. Dietary Fibers
Daily intake of right amount of fibers can prevent and treat Diabetes. As Increased consumption of vegetables, whole grains, and soluble and insoluble fiber is associated with improved glucose metabolism in both diabetic and nondiabetic individuals. Improvements in insulin sensitivity and glucose homeostasis were more evident in participants following a plant-based diet compared with other commonly used diets, according to the study of "Efficacy of high-fiber diets in the management of type 2 diabetes mellitus" by Wolfram T, Ismail-Beigi F.(2)

5. Manganese
It is one of important trace in preventing osteoporosis, according to the study of "[Study of estrogen deficiency impact on manganese levels in teeth and mandible of rats after ovariectomy]. [Article in Polish]" by Rahnama M, Błoniarz J, Zareba S, Swiatkowski W.(1)and regulating blood sugar level, according to the study of "[An inadequate intake of manganese may favour insulin resistance in girls]. [Article in Spanish]" by Rodríguez-Rodríguez E, Bermejo LM, López-Sobaler AM, Ortega RM.(2)

C. Other health benefits
1. Immune system
Kidney bean contains eight basic form of amino acid which not only helps to the nervous system in relay information between themselves and cells in other parts of the body (according to the article of "Amino Acids: How They Affect the Brain and Nervous System" posted in http://www.greendivamom.com/) it also improves the immune system to generate B lymphocytes by rapid dividing and replicating for the body's antibody defense mechanism. In stuyd of "Branched-chain amino acid supplementation does not enhance athletic performance but affects muscle recovery and the immune system" by Negro M, Giardina S, Marzani B, Marzatico F., posted in PubMed (http://www.ncbi.nlm.nih.gov/pubmed/18974721), researchers found that The BCAA (branched-chain amino acids) also modifies the pattern of exercise-related cytokine production, leading to a diversion of the lymphocyte immune response towards a Th1 type. According to these findings, it is possible to consider the BCAA as a useful supplement for muscle recovery and immune regulation for sports events.

2. Anthocyanins
Anthocyanin, one of the powerful antioxidant which make the color of kidney bean skin looking darker helps to inhibit promotion and progression of tumor and cancer cells by accelerating the rate of cell turnover. In a study of "Anthocyans from fruits and vegetables--does bright colour signal cancer chemopreventive activity?" by Cooke D, Steward WP, Gescher AJ, Marczylo T., posted in PubMed (http://www.ncbi.nlm.nih.gov/pubmed/16084717), researchers found that the currently available literature provides tantalising hints of the potential usefulness of anthocyans or anthocyan mixtures as cancer chemopreventive interventions. Nevertheless further studies are necessary to help adjudge the propitiousness of their clinical development.

3. Type II diabetes
Since it contain high amount of fiber, it slows the releasing glucose in to bloodstream, thus reducing the risk of pancreas stress in production of insulin, causing type II diabetes, according to the study of of "Efficacy of high-fiber diets in the management of type 2 diabetes mellitus" by Wolfram T, Ismail-Beigi F., posted in PubMed (http://www.ncbi.nlm.nih.gov/pubmed/20713332),

4. Cholesterol
Kidney bean's dietary fiber not only helps to reduce blood cholesterol by bonding with the bile acids in the intestine (according to the study of "Hypolipidemic effect of fresh Triticum aestivum (wheat) grass juice in hypercholesterolemic rats" by Kothari S, Jain AK, Mehta SC, Tonpay SD., posted in PubMed (http://www.ncbi.nlm.nih.gov/pubmed/21485304)), it also improves the digestive system in expelling stool that reduces the risk of constipation, according to the study of "A controlled, randomized, double-blind trial to evaluate the effect of a supplement of cocoa husk that is rich in dietary fiber on colonic transit in constipated pediatric patients" by Castillejo G, Bulló M, Anguera A, Escribano J, Salas-Salvadó J.

5. Rheumatoid Arthritis (RA)
Since kidney bean contains a measure amount of copper, the mineral that helps to promote the enzymatic activity that enhances the normal elastic properties of ligaments, joints and blood vessels, thus reducing the risk of rheumatoid arthritis (RA)., according to the study of "Predictive clinical and laboratory parameters for serum zinc and copper in rheumatoid arthritis" by Mussalo-Rauhamaa H, Konttinen YT, Lehto J, Honkanen V., researchers indicated that there is an association between the immune-inflammatory rheumatoid process and the serum zinc concentration. CRP alone had only a 3% independent predicting value for serum zinc,...

Side effect
1. Purines
Since kidney bean contains a certain amount of purines, that can cause problem for people with kidney and gallbladder diseases due to accumulation of high amount of uric acids.
2. Phytohemagglutinin
Phytohemagglutinin can lead to the disruption of cellular metabolism, which can have very toxic and harmful effects.
3. Etc.