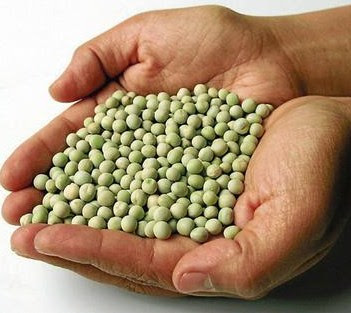 Dried peas
Dried peas is a small but nutritionally mighty member of the legume family, genus Pisum belongs to the family Fabaceae. It has a healthy source of protein, fibers, vitamins and minerals that is good for everyone diet.

Nutritional supplements1. Carbohydrates
2. Dietary fiber
3. Fat
4. Protein
5. Vitamin A ( Beta carotene, lutein and zeaxanthin)
6. B vitamins
7. Vitamin C
8. Calcium
9. Iron
10. Magnesium
11. Phosphorus
12. Potassium
13. Zinc
14. Etc.Health benefits
A. Health Benefits according to studies
1. Protein-based pharmaceuticals
In the investigation of proteinsof plant, including peas and it effect in production of pharmaceuticals, found that the active antigens produced were also stable for more than 4 years. Pea can be used as a feed additive, up to a proportion of 30% to total feed, despite the presence of lectins. Thus, a low dosage of recombinant pea-based pharmaceuticals is non-hazardous, according to the study of "Feasibility of Pisum sativum as an expression system for pharmaceuticals" By Mikschofsky H, Broer I.(a)

2. Vaccine
In the evaluation of fried peas benefits and it effects in haemorrhagic disease virus (RHDV), found that there is a significant effect of the promoter on expression of VP60(genetically engineered and manufactured version of the major structural protein of RHDV) gene from rabbit hemorrhagic disease virus, according to the study of "Pea-derived vaccines demonstrate high immunogenicity and protection in rabbits against rabbit haemorrhagic disease virus" by Mikschofsky H, Schirrmeier H, Keil GM, Lange B, Polowick PL, Keller W, Broer I.(b)

B. Health Benefits according to the concentration
1. Molybdenum
Molybdenum cofactor is vital for human enzymes, including xanthine oxidase, sulfite oxidase, and aldehyde oxidase, Deficiency may cause
a. Prenatal brain disruption, according to the study of "Prenatal brain disruption in molybdenum cofactor deficiency" by Carmi-Nawi N, Malinger G, Mandel H, Ichida K, Lerman-Sagie T, Lev D.(1)

2. Dietary Fibers
Daily intake of right amount of fibers can prvent and treat
a. Diabetes, as Increased consumption of vegetables, whole grains, and soluble and insoluble fiber is associated with improved glucose metabolism in both diabetic and nondiabetic individuals. Improvements in insulin sensitivity and glucose homeostasis were more evident in participants following a plant-based diet compared with other commonly used diets, according to the study of "Efficacy of high-fiber diets in the management of type 2 diabetes mellitus" by Wolfram T, Ismail-Beigi F.(3)

b. Cholesterol and cardivascular diseases, as the soluble fiber content of legumes and vegetables has also been shown to decrease LDL-C. Current investigations continue to explore this area in depth and examine potential synergies between dietary fiber and other phytochemicals that may lower cholesterol, according to the study of "Effects of soluble dietary fiber on low-density lipoprotein cholesterol and coronary heart disease risk" by Bazzano LA.(4)

3. Tryptophan
Tryptophan in dried bean is not only essential for normal growth and balanced out nitrogen in the body, it is also an antioxidant that helps to enhances the immune system in fighting against the forming of free radical and foreign invasion, thus reducing the risk of inflammation and infection. By enhancing the immune system, trytophan also inhiblts the cancer cells growth, in a study of "Uveal melanoma expression of indoleamine 2,3-deoxygenase: establishment of an immune privileged environment by tryptophan depletion." by Chen PW, Mellon JK, Mayhew E, Wang S, He YG, Hogan N, Niederkorn JY., posted in PubMed, researchers concluded that Addition of the IDO inhibitor 1-methyl dl-tryptophan significantly diminished kynurenine levels in IFN-gamma treated uveal melanoma cell cultures...... IFN-gamma inducible IDO upregulation by primary and metastatic uveal melanoma may generate a local immune privileged microenvironment to promote escape from T cell-mediated immune surveillance.

C. Other Health Benefits
1. Manganese
Manganese in dried peas not only is a processor for the metabolizing of glucose and carbohydrates, it also plays an important role as part of the natural antioxidant enzyme superoxide dismutase (SOD), that helps to fight the damage caused by free radicals, according to the study of "Regulation of Manganese Antioxidants by Nutrient Sensing Pathways in Saccharomyces cerevisiae" by Reddi AR, Culotta VC., posted in PubMed, researchers found that loss of either of these upstream kinase sensors dramatically inhibited the potency of Mn as an antioxidant. Downstream of Rim15p are transcription factors Gis1p and the redundant Msn2/Msn4p pair that typically respond to nutrient and stress signals. Both transcription factors were found to modulate the potency of the Mn-antioxidant but in opposing fashions: loss of Gis1p was seen to enhance Mn-antioxidant activity whereas loss of Msn2/4p greatly suppressed it. Our observed roles for nutrient and stress response kinases and transcription factors in regulating the Mn-antioxidant underscore its physiological importance in aerobic fitness.
2. Folate
Folate beside is important for the production of red blood cells, and for the proper development of the brain, it also helps to enhance the replication and maintain DNA and RNA, thus reducing the risk of birth defects, in a study of "Go folic!" by Bland J., posted in PubMed, researchers state that in order to prevent neural tube defects (NTDs), and proactively prevent new cases of spina bifida and hydrocephalus, it is essential that women take folic acid well before becoming pregnant. Through the use of social networks, and the voice of healthcare professionals, it is hoped that more women than ever before will receive the Go Folic! message and start taking the 400mcg/day required to ensure the development of a healthy brain and spine.
3. Potassium
Potassium beside is important for sympathetic function in regulating body fluid, it also plays an essential role in enhancing the nervous system in information transmitting within the nerves in the brain. According to the article of "POTASSIUM DEFICIENCY IN THE RABBIT AS A CAUSE OF MUSCULAR DYSTROPHY " by E. L. HOVE AND JOHN F. HERNDON Department of Animal Husbandry and Nutrition, Alabama Polytechnic Institute, Auburn, researchers wrote in summary that Potassium-deficient rabbits usually developed a severe and rapidly progressing muscular dystrophy, with a closely associated creatinurea.
4. Vitamin K
Vitamin K not only plays an important role in protecting our skin from aging, it is also needed for the proper clotting of blood, thus decreasing the risk of excessive bleeding, in a study of "Delayed vitamin K deficiency as a cause of bleeding: still a concern in the 21st century!" by Kasatkar P, Shetty S, Ghosh K., posted in PubMed, researchers found that Laboratory tests confirmed acquired bleeding diathesis due to vitamin K deficiency, which was corrected after adequate vitamin K supplementation. VKDB is not an uncommon phenomenon and should be considered in the differential diagnosis of a child with bleeding diathesis.
5. Etc.

Side effect1. Purines Excessive intake of purine can cause health problems for people with untreated kidney and gallbladder diseases due to accumulation of uric acid.
2. Etc.