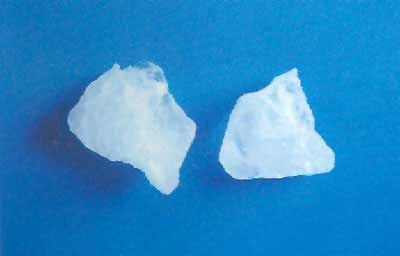 Bai Fan is also known as alum. It is a chemical compound with formula KAl(SO4)2.12H2O. and a class of chemical compounds with formula AB(SO4)2.12H2O. The sour, astringent and cold herb has been used in TCM as as external medicine to expel ringworm, and rashes caused by infection and to treat chronic diarrhea, blood in the stool, uterine bleeding, vaginal discharge as it dispels phlegm, expels toxins, eliminates parasites and dampness, stops bleeding and diarrhea and cears heat by enhancing the functions of large intestine, liver, lung, spleen and stomach channels.

Health benefits
1. Infection
In vitro studies, researchers found that Bai Fan fights infections caused by a variety of bacteria, including S. aureus, pneumococcus, salmonella and anthrax bacillus.
2. Skin Problem
High concentrations of alum can inhibit the grown of the bacteria that causes acne and pimple.
3. Abdominal uterine prolapse
Researchers found that 4% extracted Alum concentration used locally has an effect in preventing abdominal uterine prolapse.
4. Vaginal Infection
In In vitro studies, researchers found that concentration of 1o% of Bai Fan have an effectiveness in treating vaginal trichomoniasis.
5. Leukorrhagia
In study, researchers found that 1-5% concentration has an antiperspirant and prevented perspiration properties and suggest that Bai Fan might have an effect in the function of lymphadenitis and perspiration, detoxification.
6. Innate immune responses
Alum enhance the immune response defend the our body from infection by other organisms invasion. without acting as an adjuvant for specific immunity, according to the study of “Alum induces innate immune responses through macrophage and mast cell sensors, but these sensors are not required for alum to act as an adjuvant for specific immunity” by McKee AS, Munks MW, MacLeod MK, Fleenor CJ, Van Rooijen N, Kappler JW, Marrack P., posted in PubMed(1)
7. Malaria
Potash alum, a traditionally known salt in Indian Ayurveda and Chinese medicine system, have shown the activity in prevnting malaria by acting as a larvicide and growth disruptor, according to the study of “Mosquito larvicidal potential of potash alum against malaria vector Anopheles stephensi (Liston)” by Preet S, Seema KC., posted in PubMed(2)
8. Influenza virus-like particle vaccines
Influenza prevention is always important for the aging population due to age-related weakened immune system. In a study of aging mice, two inflammatory adjuvants, Imject(®) alum (a stimulator of the Nod-like receptor, Nalp3) and poly I:C (a toll-like receptor type 3 ligand), were used during vaccination with novel influenza virus-like particles (VLP). Adult (4 month old) or aged (24 month old) mice were vaccinated with VLPs alone or in combination with adjuvant., conducted by University of Pittsburgh, posted in PubMed(3), researchers found that Influenza VLPs used in combination with two different inflammatory adjuvants during vaccination allow for the immune system to overcome the deficiency in the aged immune system to influenza virus infection.
9. Type 1 diabetes
GAD-alum uased to treat children and adolescents with type 1 diabetes has shown no sign of GAD autoantibody epitope pattern, according to the study of “GAD autoantibody epitope pattern after GAD-alum treatment in children and adolescents with type 1 diabetes” by
Skoglund C, Chéramy M, Casas R, Ludvigsson J, Hampe CS., posted in PubMed(4), researchers wrote thatGAD-alum injections did not affect binding of GADA to SPS-related epitopes, further supporting the safety of the treatment. There were no changes in GADA epitope specificity to the T1D-related epitopes, except for a temporarily increased binding to one of the tested epitopes.
10. H5N1 split-virion vaccine
Alum has shown the property of enhancing the efficacy of an H5N1 split-virion vaccine in the ferret model as measured by immunogenicity, mortality, morbidity, and brain invasion, according to the sudy of “Enhanced immunogenicity, mortality protection, and reduced viral brain invasion by alum adjuvant with an H5N1 split-virion vaccine in the ferret” by
Side effects
1. Overdoses of Fai Fan can irritate the mucus membranes
2. Overdose can cause nausea, ulceration,and vomiting.
3. Pregnant women should not take Bai Fan fue its cold and toxic nature
4. It can cause depletion of calcium and phosphorus.
5. Etc.