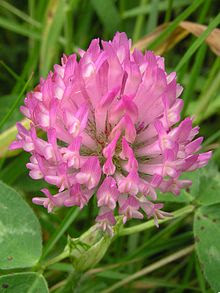 Red Clover is a short-lived perennial plant, in the genus Trifolium, belonging to the family Fabaceae, native to to Europe, Western Asia and northwest Africa. The herb has been used in traditional medicine as diuretic and liver cleansing agent and to treat cancer, whooping cough, respiratory problems, and skin inflammations, etc.

3. Osteoporosis
High levels of phytoestrogenic isoflavanoids are associated with a low incidence of osteoporosis and menopausal vasomotor symptoms, as plant extracts such as red clover, which contain high levels of isoflavanoids, have been used to reduce menopausal symptoms and have been shown to reduce bone loss in healthy women. A placebo-controlled clinical trial [ISRCTN42940165] of red clover is reported in this issue of Breast Cancer Research, according to "Isoflavones and women's health" by Powles T.(3)

4. Psychological benefits in menopausal women
Red clover isoflavones is one of the most extensively studied food supplements when counselling women about menopausal management options, found that a recent study using validated depression scales has shown that women using red clover isoflavones may also derive psychological benefits. Safety data are reassuring for the endometrium and breast, although further studies would be welcome, particularly in women with significant medical risks, according to "Taking an integrated approach: managing women with phytoestrogens" by Panay N.(4)

6. Anti cancers
In the investigation of Isoflavones from red clover and soy plant extracts and theirs estrogenic activity and potential to promote the growth of hormone-dependent cancer cells. found that Isoflavones and plant extracts significantly reduced the proliferation activity of the treated cancer cell lines. Growth promotion was not observed, but apoptosis or necrosis induction was, as was cell cycle arrest, with genistein as the most potent isoflavone. Isoflavones and plant extracts from soy and red clover, respectively, do not promote the growth of human cancer cells but induce decreased cell proliferation, increased apoptosis and cell cycle arrest, according to 'Red clover and soy isoflavones--an in vitro safety assessment" by Reiter E, Gerster P, Jungbauer A.(6)

7. Alternative estrogen replacement therapy
In the study of the benefits of plant extracts from soy and red clover as alternatives to conventional hormone replacement therapy (HRT) found that Biochemical analysis shows that these representatives of phytoestrogens have multiple actions beside selective estrogen receptor modulator (SERM)-activity. They act as selective estrogen enzyme modulators (SEEMs), have antioxidant activity and interact with transcription factors such as NF-kappaB. Furthermore, it is indicated that they have protective effects on osteoporosis and the cardiovascular system, according to "Phytoestrogens derived from red clover: an alternative to estrogen replacement therapy?" by Beck V, Rohr U, Jungbauer A.(7)

Side effects
1. Red clover may cause allergic effect such as headache, nausea, rash, etc.
2. Do not use the herb in children or if you are pregnant or breast feeding without approval from the related field specialist.
3. Red clover may interact with other herbs or medicine, including tamoxifen and blood thinner medicine
4. Overdose may cause excessive bleeding.
5. Etc.