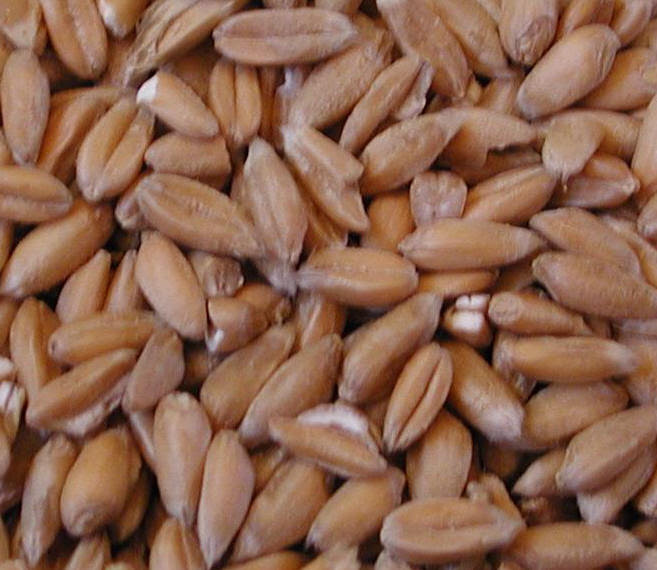 Spelt
Spelt (Triticum spelta) is considered as a subspecies of common wheat, in genus Tritium and belong to family Poaceae originated from Transcaucasia, north of the Black Sea. It now grows only in Central Europe as a health food.


Health benefits
A. Health benefits according to researches
1. Cholesterol
In the assessment of wheat bran and other sources of dietary fibre and their effects on cholesterol levels found that addition of bran (on average 38 g/day) to a low-fibre diet caused an increase in the level of serum cholesterol by on average 0.34 mmol/l (P less than or equal to 0.005). The amount and type of dietary fibre had no substantial effect on the HDL-cholesterol concentration, accoding to the study of "Increase of serum cholesterol in man fed a bran diet" by Stasse-Wolthuis M, Katan MB, Hermus RJ, Hautvast JG.(a)

2. Cytotoxicity
In the measurement in terms of inhibition of cell growth, activation of apoptosis against human colon cancer Caco-2/TC7 found that the resdult have shown a constant and significant toxic effect of spelt wheat which is not shared by the two other ancient cereals. Future studies on celiac intestinal organ cultures are needed to increase the prospects of breeding programs aimed at developing wheat cultivars potentially tolerated by most celiac patients, according to "Environmental factors of celiac disease: cytotoxicity of hulled wheat species Triticum monococcum, T. turgidum ssp. dicoccum and T. aestivum ssp. spelta" by
Vincentini O, Maialetti F, Gazza L, Silano M, Dessi M, De Vincenzi M, Pogna NE.(b)

B. Health benefits according to the concentration
1. Manganese
It is one of important trace in preventing osteoporosis, according to the study of "[Study of estrogen deficiency impact on manganese levels in teeth and mandible of rats after ovariectomy]. [Article in Polish]" by Rahnama M, Błoniarz J, Zareba S, Swiatkowski W.(1)and regulating blood sugar level, according to the study of "[An inadequate intake of manganese may favour insulin resistance in girls]. [Article in Spanish]" by Rodríguez-Rodríguez E, Bermejo LM, López-Sobaler AM, Ortega RM.(2)

2. Dietary fiber
Daily intake of right amount of fibers can prvent and treata. Diabetes, as Increased consumption of vegetables, whole grains, and soluble and insoluble fiber is associated with improved glucose metabolism in both diabetic and nondiabetic individuals. Improvements in insulin sensitivity and glucose homeostasis were more evident in participants following a plant-based diet compared with other commonly used diets, according to the study of "Efficacy of high-fiber diets in the management of type 2 diabetes mellitus" by Wolfram T, Ismail-Beigi F.(3)

C. Others health benefits
1. Nervous system
Spelt contains high amount of manganese, a powerful antioxidant beside helping to prevent the forming of free radicals, it also is essential for enhancing the brain cells in information transmitting between themselves and cells in other parts of the body.. according to the study of "Role of manganese in neurodegenerative diseases" by Bowman AB, Kwakye GF, Herrero Hernández E, Aschner M., posted in PubMe (http://www.ncbi.nlm.nih.gov/pubmed/21963226), reserachers found that with a brief survey on the potential role of Mn in the etiologies of Alzheimer's disease (AD), amyotrophic lateral sclerosis (ALS) and prion disease. Where possible, we discuss the mechanistic commonalities inherent to Mn-induced neurotoxicity and neurodegenerative disorders.

2. Niacin
Niacin beside improves the function of circulatory system in transporting blood to the body ( according to the study of "[The effect of a dimenhydrinate combination of the cardiovascular system and cerebral blood circulation in the anaesthetized dog].[Article in German]", by Hahn N, Felix R, Sonnenfeld A, Babour A, Heidari S., posted in PubMed (http://www.ncbi.nlm.nih.gov/pubmed/235268), researchers concluded that in view of our results the central effect of dimenhydrinate combined with niacin and pyridoxine-HCl hypothetically may be improved by metabolic influences on the cells and their membranes), it also plays an essential role in fighting against free radical from oxidizing bad cholesterol (LDL) leading to hardening the walls of blood vessel, (According to the study of "Attenuation of the synthesis of plasminogen activator inhibitor type 1 by niacin. A potential link between lipid lowering and fibrinolysis" Brown SL, Sobel BE, Fujii S., posted in PubMed(http://www.ncbi.nlm.nih.gov/pubmed/7641354), researchers indicated that niacin, by decreasing PAI-1 expression, may potentiate fibrinolysis, thereby decreasing the stimulation of atherogenesis by clot-associated mitogens associated with microthrombi. Furthermore, the results imply that a pathogenetic link may exist between intracellular lipid metabolism and regulation of expression of fibrinolytic system components.

3. Cholesterol
By binding to the bile acids and expelling them as a waste product, fiber helps to remove bad cholesterol, according to the study of "Hypolipidemic effect of fresh Triticum aestivum (wheat) grass juice in hypercholesterolemic rats" by Kothari S, Jain AK, Mehta SC, Tonpay SD., posted in PubMed (http://www.ncbi.nlm.nih.gov/pubmed/21485304), researchers worte that The results of present study revealed hypolipidemic effect of Triticum aestivum GJ in hypercholesterolemic rats by increasing fecal cholesterol excretion. Fresh GJ could have potentially beneficial effect in atherosclerosis associated with hyperlipidemia.


4. Type II diabetes
Magnesium beside is important in maintaining the ratio of potassium for the lymphatic in regulating the fluid in the body, it also a cofactor for the enzymes which are responsible for the secretion of glucose, thus reducing the risk of type II diabetes. According to the study of "Effects of improved glycaemic control on calcium and magnesium homeostasis in type II diabetes" by McBain AM, Brown IR, Menzies DG, Campbell IW., posted in PubMed (http://www.ncbi.nlm.nih.gov/pubmed/3192752), researchers found that patients receiving glipizide exhibited little change in either magnesium or calcium excretion but showed a significant rise in serum magnesium.

5. Irregular cell growth
Lignans, one of the phytoestrogens helps to bind the estrogen receptor site, thus reducing the strong estrogen being produced by liver, thus reducing the risk of breast cancer and enhancing the regular menstrual cycle, according to the study of "Anticancer Lignans - from Discovery to Biotechnology" by Ionkova I., posted in PubMed(http://www.ncbi.nlm.nih.gov/pubmed/21762103) researchers concluded that Due to the pharmaceutical importance and the low content in the plants the present review focuses on discovery and alternative production systems for anticancer lignans - aryltetralin and arylnaphthalene lignans.

Side effects
1. Spelt contains a measure amount of gluten, it can cause gluten-sensitive to some people.
2. Allegic effects
In the investigation of Gliadin was isolated from wheat flour by two step 60% ehanolic extraction of various species of wheat. and their anti allergic effects found that showed different content of immunogenic gliadin epitopes in various species of wheat. They also point for new effort to elucidate is there a need to develop new standard antigen, the representative mixture of gliadin isolated from local wheat species used for bread production in corresponding geographic region for ELISA diagnostic tests, according to the study of "Different levels of humoral immunoreactivity to different wheat cultivars gliadin are present in patients with celiac disease and in patients with multiple myeloma" by Konic-Ristic A, Dodig D, Krstic R, Jelic S, Stankovic I, Ninkovic A, Radic J, Besu I, Bonaci-Nikolic B, Jojic N, Djordjevic M, Popovic D, Juranic Z.(6)
3. Etc.