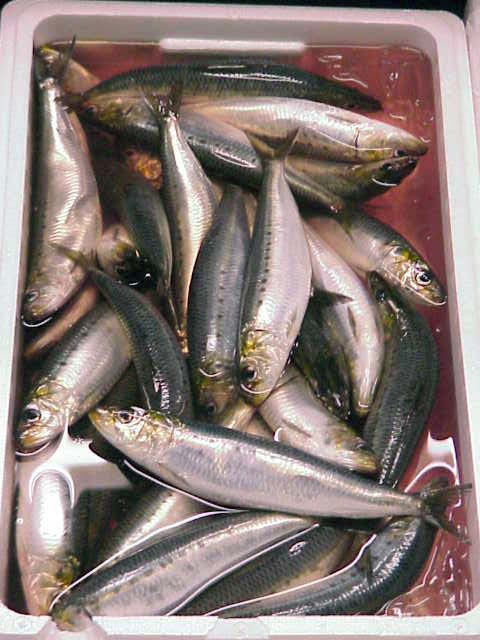 Sardines
Sardines are several types of small, salt-water, soft-boned small oily fish in the family Clupeidae. There are as many as 21 species can be classified as sardines and their main food is plankton on the surface of the water. They are commercially fished for foods and variety of uses, including animal feed, sardine oil used in manufacture paint, varnish and linoleum.

Healthy benefits
A. Health benefits according to studies
1. cardiovascular diseases
In the investigation of the nutritional benefits of fish consumption relate to the utilization of proteins of high biological value, as well as certain minerals and vitamins of fish found that The top 11 fish species [e.g., sardines, mackerel, herring (Atlantic and Pacific), lake trout, salmon (Chinook, Atlantic, and Sockeye), anchovy (European), sablefish, and bluefish] provide an adequate amount of omega-3 PUFAs (2.7-7.5g/meal) and appear to meet the nutritional recommendation of the American Heart Association, according to "Health benefits and potential risks related to consumption of fish or fish oil" by Sidhu KS.(a)

5. Lactation
In the assessment of what effect the ingestion of sardines, rich in omega-3 series polyunsaturated fatty acids, has on the composition of breastmilk found that incorporating fish into the diets of nursing mother during lactation, in the form of 100 g of sardines two or three times a week, contributes to an increase in omega-3 series fatty acids, according to "The influence of sardine consumption on the omega-3 fatty acid content of mature human milk" by Patin RV, Vítolo MR, Valverde MA, Carvalho PO, Pastore GM, Lopez FA.(e)

B. Health benefits according to concentration
1. Vitamin B12
Besides supporting the production of red blood cell and maintaining the proper duplication of DNA, the genetic material in all cells, according to the study of "Vitamin B 12 and the macromolecular composition of Euglena. II. Recovery from unbalanced growth induced by Vitamin B 12 deficiency" by Johnston PL, Carell EF., posted in PubMed (http://www.ncbi.nlm.nih.gov/pubmed/4633443), it also plays an important role in promoting neurite outgrowth, according to the study of "Akt/mammalian target of rapamycin signaling pathway regulates neurite outgrowth in cerebellar granule neurons stimulated by methylcobalamin" by Okada K, Tanaka H, Temporin K, Okamoto M, Kuroda Y, Moritomo H, Murase T, Yoshikawa H., posted in PuBmed (http://www.ncbi.nlm.nih.gov/pubmed/21458538)

2. Vitamin D
Vitamin D not only is important to the heart health with calcium supplementation, according to "Systematic review: Vitamin D and calcium supplementation in prevention of cardiovascular event` by Wang L, Manson JE, Song Y, Sesso HD.(Ia) but also plays an vital role in epidemiological associations between vitamin D status and a large number of autoimmune and inflammatory diseases, according to "Vitamin D and inflammation" by Guillot X, Semerano L, Saidenberg-Kermanac'h N, Falgarone G, Boissier MC.(Ib)

3. Omega 3 fatty acids
Omega 3 fatty acids is necessary to maintain the ratio of good and bad cholesterol, thus reducing the risk of cholesterol inflammation according to the study of "In vitro fatty acid enrichment of macrophages alters inflammatory response and net cholesterol accumulation" by Wang S, Wu D, Lamon-Fava S, Matthan NR, Honda KL, Lichtenstein AH., posted in PubMed (II) and forming of free radical in the heart cells, leading to heart diseases. It also reduces the risk of plaque forming in the arterial wall, thus also decreasing the risk of stoke, according to the study of "N-3 vs. saturated fatty acids: effects on the arterial wall" by Sudheendran S, Chang CC, Deckelbaum RJ., posted in PubMed (III).

4. Tryptophan
It is one of important element in assisting the production of serotonin hormone of which is essential to enhance relaxation and sleep, according to the study of "The tryptophan depletion test. Impact on sleep in healthy subjects and patients with obsessive-compulsive disorder" by Huwig-Poppe C, Voderholzer U, Backhaus J, Riemann D, König A, Hohagen F., posted in PubMed(IV) and reduces the risk of , panic, social anxiety, and post-traumatic stress disorders, according to the study of "Effects of acute tryptophan depletion in serotonin reuptake inhibitor-remitted patients with generalized anxiety disorder" by Hood SD, Hince DA, Davies SJ, Argyropoulos S, Robinson H, Potokar J, Nutt DJ., posted in PubMed (V)

5. Protein
In the research of the importance of dietary proteins influence body weight by affecting four targets for body weight regulation: satiety, thermogenesis, energy efficiency, and body composition, found that Ingestion of dietary proteins in diabetes type 1 exerts a delayed postprandial increase in blood glucose levels due to protein-induced stimulation of pancreatic glucagon secretion. Higher than minimal amounts of protein in the diet needed for nitrogen balance may play an important role for the increasing number of elderly obese subjects in our industrialized societies, since proteins exert beneficial effects in the conditions of overweight, metabolic syndrome, cardiovascular risk factors, bone health, and sarcopenia. Adverse effects of increased dietary proteins have been observed in subjects with renal impairment- this problem is frequently observed in the elderly, hypertensive, and diabetic population. Nevertheless, dietary proteins deserve more attention than they have received in the past, according to "Dietary proteins in obesity and in diabetes" by Keller U.(VI)

C. Other health benefits
1. Calcium
Since it contains high levels of vitamin D and protein, it improves our body in absorption of calcium, thus reducing the risk of osteoporosis, ensuring strong, healthy bones and teeth, especially for vegetarian, according to the study of "Calcium and vitamin D nutrition and bone disease of the elderly" by Gennari C, posted In PubMed (1) and acting as a second messenger, in neurotransmitter release from neurons, contraction of all muscle cell types, and fertilization., according to the article of "Calcium in biology" posted in Wikipedia (2)
2. Coenzyme Q10
CoQ10 is an antioxidant that scavenge free radicals, regulate the normal cells growth by reducing the risk of damaging compounds in the cell membranes that tamper with DNA, according to the study of "Coenzyme Q10 as a potent compound that inhibits Cdt1-geminin interaction" by Mizushina Y, Takeuchi T, Takakusagi Y, Yonezawa Y, Mizuno T, Yanagi K, Imamoto N, Sugawara F, Sakaguchi K, Yoshida H, Fujita M., posted in PubMed(3)

3. Niacin
Niacin raises high-density lipoprotein cholesterol levels in in patients with dyslipidemia, thus protecting against the risk of cardiovascular disease, according to the study of "Niacin: A Critical Component to the Management of Atherosclerosis: Contemporary Management of Dyslipidemia to Prevent, Reduce, or Reverse Atherosclerotic Cardiovascular Disease" by Mason CM, Doneen AL., posted in PubMed (4)

4. Menstrual cramps and pain
Omega 3 fatty acid helps to maintain the balance of Omega 6 which is essential in relaxing the abdominal muscle. Imbalance causes the over production of prostaglandin hormone, leading menstrual cramps and pain, according to the study of "Evaluation of the effects of Neptune Krill Oil on the management of premenstrual syndrome and dysmenorrhea" by Sampalis F, Bunea R, Pelland MF, Kowalski O, Duguet N, Dupuis S., posted in PubMed (5), researchers filed the conclusion that Neptune Krill Oil can significantly reduce dysmenorrhea and the emotional symptoms of premenstrual syndrome and is shown to be significantly more effective for the complete management of premenstrual symptoms compared to omega-3 fish oil.

5. Etc.
Side Effects
1. Allergic reaction
2. Purine can cause kidney stone in some people if accumulated in a large amount.
3. Etc.