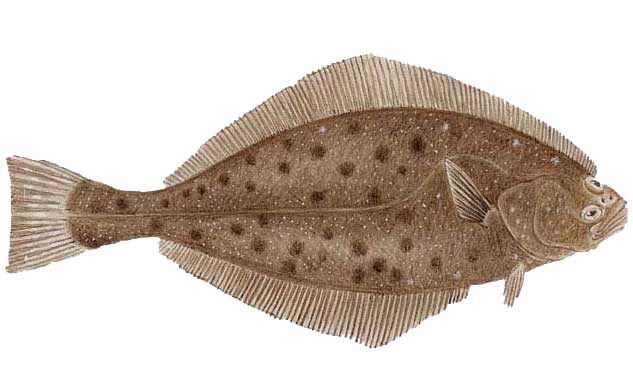 Halibut
Halibut is a flatfish, averaging 11–13.5 kgs (24–30 lb), genus Hippoglossus, from the family of Pleuronectidae, living in both the North Pacific and the North Atlantic oceans. They do not reproduce until age of eight and therefore are considered as a matures slowly fishes, thus require international management of many countries for their survival, such as individual fishing quotas, total allowable catch each year, etc.

Health Benefits
C. Health benefits according to studies
1. Cardiovascular disease, stroke, and diabetes
In the study of Preferential consumption for maximum health benefits indicated that consumption of fish and shrimp containing omega-3 fatty acids can result in protective health effects including a reduced risk of cardiovascular disease, stroke, and diabetes, but Mercury can increase the risk of cardiovascular problems and impede neurological development., according to" Mercury concentrations and omega-3 fatty acids in fish and shrimp: Preferential consumption for maximum health benefits" by Smith KL, Guentzel JL.(a)

3. Plasma concentrations of Persistent Organic Pollutants (POPs)
In the investigation of intake of fatty fish decreases the risk of cardiovascular diseases and increase the body burden of Persistent Organic Pollutants (POPs) found that even though the participants had a high intake of marine food they did not have elevated levels of POPs compared to other study groups. Intake of fatty fish did not significantly affect the body burden of POPs in this study group, according to "Associations between marine food consumption and plasma concentrations of POPs in a Norwegian coastal population" by Rylander C, Sandanger TM, Brustad M.(c)

B. Health benefits according to concentration
1. TryptophanTryptophan is one of the 10 essential amino acids which the body uses to synthesize the proteins for brain cells need, thus enhancing the nerve cells in information transmitting between themselves and cells in the parts of the body that reduces the risk of anxiety and depression, according to the study of "The effects of tryptophan depletion on neural responses to emotional words in remitted depression" by Roiser JP, Levy J, Fromm SJ, Nugent AC, Talagala SL, Hasler G, Henn FA, Sahakian BJ, Drevets WC.(I)

3. ProteinIn the research of the importance of dietary proteins influence body weight by affecting four targets for body weight regulation: satiety, thermogenesis, energy efficiency, and body composition, found that Ingestion of dietary proteins in diabetes type 1 exerts a delayed postprandial increase in blood glucose levels due to protein-induced stimulation of pancreatic glucagon secretion. Higher than minimal amounts of protein in the diet needed for nitrogen balance may play an important role for the increasing number of elderly obese subjects in our industrialized societies, since proteins exert beneficial effects in the conditions of overweight, metabolic syndrome, cardiovascular risk factors, bone health, and sarcopenia. Adverse effects of increased dietary proteins have been observed in subjects with renal impairment- this problem is frequently observed in the elderly, hypertensive, and diabetic population. Nevertheless, dietary proteins deserve more attention than they have received in the past, according to "Dietary proteins in obesity and in diabetes" by Keller U.(IV)

b. Beside providing strength to bones and teeth by working together with calcium,according to the study of "The Abnormal Phenotypes of Cartilage and Bone in Calcium-Sensing Receptor Deficient Mice Are Dependent on the Actions of Calcium, Phosphorus, and PTH" by Liu J, Lv F, Sun W, Tao C, Ding G, Karaplis A, Brown E, Goltzman D, Miao D., posted in PubMed(VI), it also helps to converse Riboflavin and Niacin to the active coenzyme forms for digestion and absorption.

6. Etc.
C. Other health benefits
1. Cardiovascular health
It contains high levels of vitamin B complex, such as vitamin B6, 12 and folic acid that lower the levels of homocystein produced during the methylation cycle, resulting in lessening the risk of hardening arterial wall and high blood pressure, according to the study of "Plasma total homocysteine, B vitamins, and risk of coronary atherosclerosis." by Verhoef P, Kok FJ, Kruyssen DA, Schouten EG, Witteman JC, Grobbee DE, Ueland PM, Refsum H., posted in PubMed(1)
2. Heart diseases and stroke
High levels of Omega 3 fatty acid balances the levels of good and bad cholesterol as it reduces the risk of inflammation, thus reducing the the risk of plaque clogging the arteries, leading to heart diseases and stroke, according to the study of "Omega-3 Polyunsaturated Fatty Acids and Cardiovascular Diseases" by Carl J. Lavie, MD, Richard V. Milani, MD, Mandeep R. Mehra, MD{dagger} and Hector O. Ventura, MD, posted in Journal of American College of Cardiology(2)

3. Magnesium
Magnesium and copper are essential minerals help to increase blood flow to the body cells including the cells in the reproductive organ, thus reducing the risk of infertility, according to the study of "Correction of subnormal fertility with copper and magnesium supplementation" by Ingraham RH, Kappel LC, Morgan EB, Srikandakumar A., posted in Pubmed (3), researchers found that cows supplemented with both Cu and Mg showed improved fertility, whereas those supplemented with Cu or Mg alone did not.

4. Normal cell growth
Zinc is an important minerals that helps to improve the immune system in regulating the proper of cell division and growth, according to the study of "Zinc in human health: effect of zinc on immune cells" by Prasad AS., posted in PubMed(4)

5. Etc.
Side effects
1. Since halibut is on top of the food chain, contamination may be a concern.
2. Purine may cause kidney stone to some people if accumulated in a large amount.
3. Etc.