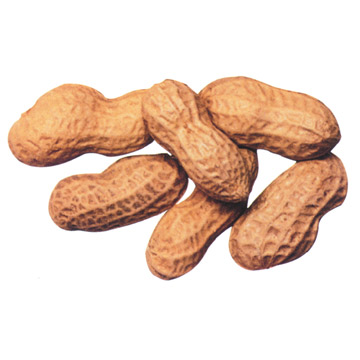 Peanuts
Peanuts is belong to the the legume related to the bean family and first cultivated in the in the Chaco region of Paraguay and Bolivia.

Health Benefits
A. Health benefits according to studies
1. Phenolic antioxidants
In the investigation of Peanut skins, a byproduct of peanut and its high levels of phenolic antioxidants found that the maximum predicted total phenolic content (TPC), under the optimized conditions (30.8%, 30.9 degrees C, 12 min) was 118 mg of gallic acid equivalents (GAE)/g of skins. MeOH(solvent type) extracts had the highest oxygen radical absorbance capacity (ORAC) activity of 2149 micromol of TE/g followed by EtOH(solvent type) and water under the optimized conditions of 30% MeOH, 52.9 degrees C and 30 min, according to "Optimizing the extraction of phenolic antioxidants from peanut skins using response surface methodology" by Ballard TS, Mallikarjunan P, Zhou K, O'Keefe SF.(a)

2. Synthetic food ingredients replacement
In the searching of natural alternatives to synthetic antioxidants and antimicrobials agents as consumers become concerned with currently used compounds found that many of the recent patents concerning peanut phytoalexins focus on this area with patents being submitted for synergistic effects with chemotherapy drugs and treatment of diabetes and hepatitis B. Peanut phytoalexins may not only be able to replace synthetic food ingredients, but may also treat diseases that currently plague the human population, according to "Recent applications of peanut phytoalexins" by Holland KW, O'Keefe SF.(b)

4. Hypolipidemic and hepatoprotective effects
In the determination of physicochemical and antioxidant properties of mixture of Flax/Sesame (LS) and Flax/Peanut (LA) and thiers hypolipidemic, antioxidant and hepatoprotective activities, found that Administration of (LS) or (LA) seeds mixture to hypercholesterolemic rats (MS-LSchol and MS-LAchol groups respectively) significantly ameliorated lipid parameters and showed an increase of PUFAs (ALA and LA) and MUFAs and a decrease of SFAs in plasma and liver of MS-LSchol and MS-LAchol groups. Furthermore, malondialdehyde levels decreased and the efficiency of antioxidant defense system was improved compared to CD-chol group. Liver histological sections showed lipid storage in hepatocytes of CD-chol group and an improvement was noted in both supplemented groups. Our results suggested that seeds mixtures of Flax/Sesame and Flax/Peanut have anti-atherogenic and hepatoprotective effects, according to "Hypolipidemic and hepatoprotective seeds mixture diet rich in omega-3 and omega-6 fatty acids" by Makni M, Fetoui H, Garoui el M, Gargouri NK, Jaber H, Makni J, Boudawara T, Zeghal N.(d)

B. Health benefits according to concentration
1. ManganeseManganese beside plays an vital role for the proper and normal growth of human bone structure (accodring to the study of "Bone formation within alumina tubes: effect of calcium, manganese, and chromium dopants" by Pabbruwe MB, Standard OC, Sorrell CC, Howlett CR., posted in PubMed (http://www.ncbi.nlm.nih.gov/pubmed/15109850)), it also helps to reduce the risk of cancer, (according to the study of "The effects of 3, 4 or 5 amino salicylic acids on manganese-induced neuronal death: ER stress and mitochondrial complexes" by Yoon H, Lee GH, Kim DS, Kim KW, Kim HR, Chae HJ., posted in PubMed (http://www.ncbi.nlm.nih.gov/pubmed/21477646 researchers indicated that the salicylate analogues and the antioxidants did not mediate ER stress in this model. The salicylate analogues reduced reactive oxygen species (ROS) and reversed the deficient mitochondrial membrane potential that was induced by Mn. Taken together, the 3, 4, 5 ASA worked in a similar way, regulating the Mn-induced mitochondrial dysfunction and protecting cells.

2. TryptophanTryptophan is one of the 10 essential amino acids which the body uses to synthesize the proteins for brain cells need, thus enhancing the nerve cells in information transmitting between themselves and cells in the parts of the body that reduces the risk of anxiety and depression, according to the study of "The effects of tryptophan depletion on neural responses to emotional words in remitted depression" by Roiser JP, Levy J, Fromm SJ, Nugent AC, Talagala SL, Hasler G, Henn FA, Sahakian BJ, Drevets WC.(1)

3. Vitamin B3Niacin or vitamin B3 beside is important in production of energy in metabolism of carbohydrate, it also essential for DNA repairing, according to the study of `Niacin deficiency delays DNA excision repair and increases spontaneous and nitrosourea-induced chromosomal instability in rat bone marrow`by Kostecki LM, Thomas M, Linford G, Lizotte M, Toxopeus L, Bartleman AP, Kirkland JB., posted in PubMed (http://www.ncbi.nlm.nih.gov/pubmed/17618655), production of steroid hormones in the adrenal gland, improving blood circulation and lowering the bad cholesterol (LDL) levels., according to the study of `Lowering LDL cholesterol with margarine containing plant stanol/sterol esters: is it still relevant in 2011?`by Doggrell SA., posted in PubMed (http://www.ncbi.nlm.nih.gov/pubmed/21296266).

4. FolateIn the investigation of the prevalence and multifactorial etiology of anemia among Indian human immunodeficiency virus (HIV)-infected children and its effect on anemia, found that Anemia, particularly iron deficiency anemia and anemia of inflammation, is highly prevalent among children with HIV infection. Micronutrient supplements (iron and, folate) combined with ART(antiretroviral therapy) improved anemia in HIV-infected children, according to "The prevalence and etiology of anemia among HIV-infected children in India" by Shet A, Arumugam K, Rajagopalan N, Dinakar C, Krishnamurthy S, Mehta S, Shet AS.(II)

5. CopperCopper is best known for its function in regulating the proper growth, utilization of iron, it is also a strong antioxidant, aiding the antioxidant enzyme, superoxide dismutase, and preventing oxidation in the cell membrane, according to the article of antioxidant cancer and diseases, posted in Medical Advisor Journals, in other antioxidants, 1. Copper

6. Etc.
C. Other health benefits
1. Good fatty acids
Since it contains high amount of good fatty acid which is essentail for the brain and heart heath, it helps to decrease the risk of congitive dysfunction, according to "Folic acid and polyunsaturated fatty acids improve cognitive function and prevent depression, dementia, and Alzheimer's disease--but how and why?" by Das UN.(1) and heart diseases, according to "Regular consumption of nuts is associated with a lower risk of cardiovascular disease in women with type 2 diabetes" by Li TY, Brennan AM, Wedick NM, Mantzoros C, Rifai N, Hu FB.(2)

2. Free radicals
Antioxidants in the peanut, help to improve the immune system and fights against the forming of free radical, and decrease the risk of free radicals cause of neoplastic, and neurodegenerative disorders, according to "The role of antioxidant supplement in immune system, neoplastic, and neurodegenerative disorders: a point of view for an assessment of the risk/benefit profile"by Brambilla D, Mancuso C, Scuderi MR, Bosco P, Cantarella G, Lempereur L, Di Benedetto G, Pezzino S, Bernardini R.(3)

3. Cholesterol
Peanut consumption may improve oxidant-antioxidant status in healthy and diabetic status without increasing blood lipids, "Peanut (Arachis hypogaea) consumption improves glutathione and HDL-cholesterol levels in experimental diabetes" by Emekli-Alturfan E, Kasikci E, Yarat A.(4) thus improving blood flow in the body by reducing the LDL bad cholesterol building up in the blood stream that cause clot and plaque on the arterial wall.

4. Sexual dysfunction
Arginine is an important supplements that helps the relax the blood vein, thus enhancing the blood flow in the body, including the reproductive organs, thus reducing the risk of sexual dysfunction in men, according to "Effect of propionyl-L-carnitine, L-arginine and nicotinic acid on the efficacy of vardenafil in the treatment of erectile dysfunction in diabetes" by Gentile V, Antonini G, Antonella Bertozzi M, Dinelli N, Rizzo C, Ashraf Virmani M, Koverech A.(5)

5. Osteoporosis
Magnesium in peanuts enhances bone density and bone health, according to "Magnesium deficiency and osteoporosis: animal and human observations" by Rude RK, Gruber HE.(6)

Side Effects
1. Allergy causes of anaphylactic shock.
2. Contamination caused by mold can be deadly, resulting in cirrhosis, and/or carcinoma of the liver.
3. Etc.