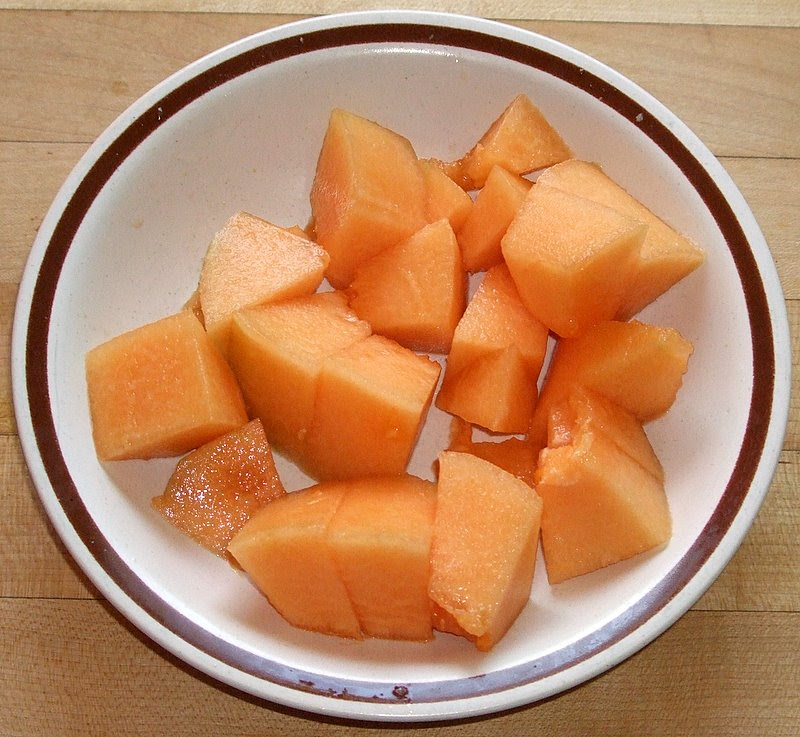 Cantaloupe Cantaloupe is a species in the family Cucurbitaceae, ranging from the size of 500g to 5.00kg and were original cultivated (The European cantaloupe) by the Egytian and in India and Africa (The North American cantaloupe).

2. Antioxidants
In the investigation of the neuroprotective, cardioprotective, and chemopreventive actions of dietary flavonoids found in Cantaloupe indicated that a clear understanding of the mechanisms of action of flavonoids, either as antioxidants or modulators of cell signalling, and the influence of their metabolism on these properties are key to the evaluation of these potent biomolecules as anticancer agents, cardioprotectants, and inhibitors of neurodegeneration, according to "
Flavonoids: antioxidants or signalling molecules?" by Robert J Williams, Jeremy P.E Spencer, Catherine Rice-Evans(b)

4. Anti cancers
In the determination of the effects of vitamin A found abundantly inCantaloupe and its anti-cancer-preventive activity found that carotenoids and vitamin A shared other protective mechanisms, such as scavenging of genotoxic oxygen species, modulation of signal transduction pathways, inhibition of cell transformation induced by physical and chemical agents, and facilitation of intercellular communication inhibited by genotoxic compounds. Therefore, carotenoids and vitamin A appear to work via multiple mechanisms, which would support a potential protective role in cancer initiation and in the pathogenesis of other mutation-related diseases, according to "Modulation of genotoxic and related effects by carotenoids and vitamin A in experimental models: mechanistic issues" by De Flora S, Bagnasco M, Vainio H.(d)

B. Health benefits according to concentration
1. Vitamin AVitamin A is not only important in preventing types I diabetes, according to "A close relationship between type 1 diabetes and vitamin A-deficiency and matrix metalloproteinase and hyaluronidase activities in skin tissues" by Takahashi N, Takasu S.(1) but also may be associated with compromised bone health, according to "Vitamins and bone health: beyond calcium and vitamin D" by Ahmadieh H, Arabi A.(I)

2. Vitamin CIn the evaluation of pulmonary dysfunction. and it effects on pulmonary dysfunction found that At present, evidence from randomised-controlled trials is insufficient to recommend a specific role for vitamin C in the treatment of asthma. Further methodologically strong and large-scale randomised controlled trials are needed in order to address the question of the effectiveness of vitamin C in children with asthma but some outcome data showed effectiveness on lung function, symptom scores, IgE levels and inhaled steroid use. One small study showed a significant difference in % drop in FEV1 post-exercise, according to the study of "Vitamin C supplementation for asthma" by Kaur B, Rowe BH, Arnold E.(II)

3. PotassiumPotassium beside is important in maintaining the regular contraction and relaxation of the muscle, that helps to reducing the risk of hypokalemia, it also helps the lymphatic system in regulating the levels of fluid in the body, thus lessening the risk of lymphedema, swelling caused by the accumulation of lymph fluid. In a study of "Narrative review: evolving concepts in potassium homeostasis and hypokalemia" by Greenlee M, Wingo CS, McDonough AA, Youn JH, Kone BC., posted in PubMed (http://www.ncbi.nlm.nih.gov/pubmed/19414841), researchers found that recent experimental insights into the participation of feedback and feedforward control mechanisms in potassium homeostasis. New data make clear that feedforward homeostatic responses activate when decreased potassium intake is sensed, even when plasma potassium concentration is still within the normal range and before frank hypokalemia ensues, in addition to the classic feedback activation of renal potassium conservation when plasma potassium concentration decreases.

4. FolateIn the investigation of the prevalence and multifactorial etiology of anemia among Indian human immunodeficiency virus (HIV)-infected children and its effect on anemia, found that Anemia, particularly iron deficiency anemia and anemia of inflammation, is highly prevalent among children with HIV infection. Micronutrient supplements (iron and, folate) combined with ART(antiretroviral therapy) improved anemia in HIV-infected children, according to "The prevalence and etiology of anemia among HIV-infected children in India" by Shet A, Arumugam K, Rajagopalan N, Dinakar C, Krishnamurthy S, Mehta S, Shet AS.(III)

5. Vitamin B6a. Memory Improvements
In the investigation of Vitamin B6 (Pyridoxine) and Memory Improvements found that The multivitamin improved speed of response on a measure of spatial working memory, according to ""Memory improvements in elderly women following 16 weeks treatment with a combined multivitamin, mineral and herbal supplement : A randomized controlled trial" by Macpherson H, Ellis KA, Sali A, Pipingas A.(IV)

b. Anti cancer effects
In the observation of Vitamin B6 (Pyridoxine) and its anti cancer effects found that vitamin B6 is involved in the methyl donor cycle ant thus, some of the antitumor properties of vitamin B6 may involve an indirect effect on the level of DNA or histone methylation. according to ""Vitamin B6 and cancer: from clinical data to molecularly mechanisms" by Sujol G, Docquier A, Boulahtouf A, Castet-Nicolas A, Cavaillès V.(V)

6. Vitamin B3In the evaluation of vitamin B3 and its effect on hyperpigmentation found that Niacinamide induces a decrease in pigmentation, inflammatory infiltrate, and solar elastosis. Niacinamide is a safe and effective therapeutic agent for this condition, according to "Natural options for the management of hyperpigmentation" by Leyden JJ, Shergill B, Micali G, Downie J, Wallo W.(VI)

7. Etc.
C. Other health benefits
1. Polyphenol antioxidants
Since it contains high amount of polyphenol antioxidants, it helps to
a) Reduce the risk of heart attack and improve over all cardiovascular system, according to "Polyphenols and Cardiovascular Disease: A Critical Summary of the Evidence" by Visioli F, Davalos A.(1)
b) Reduce the risk of oxidative stress and lipid peroxidation, according to "The effects of polyphenol-containing antioxidants on oxidative stress and lipid peroxidation in Type 2 diabetes mellitus without complications" by Fenercioglu AK, Saler T, Genc E, Sabuncu H, Altuntas Y.(2)

2. Constipation
Since it contains high amount of fiber and water, it improves the digestive track in secreting waste easier, thus reducing the the risk of constipation, according to "A dietary fiber mixture versus lactulose in the treatment of childhood constipation: a double-blind randomized controlled trial" by Kokke FT, Scholtens PA, Alles MS, Decates TS, Fiselier TJ, Tolboom JJ, Kimpen JL, Benninga MA.(3)

3. Skin healing
The high amount of vitamin K protects skin by speeding up skin healing and reducing bruising and swelling, according to "Dietary intake in clients with chronic wounds" by Wojcik A, Atkins M, Mager DR.(4)

Side Effects
1. It may cause allergic reaction for some people
2. Since it contain high amount of sugar, people with high blood sugar should consult with their doctor beforing eating it.
3. No other known side effect.