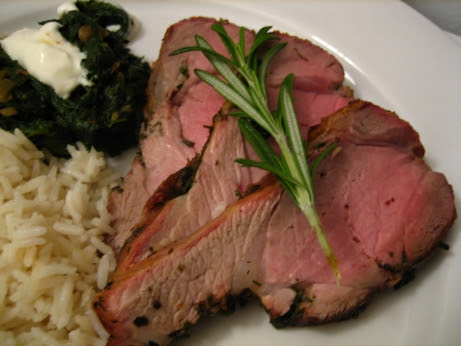 Lamb
Lamb is the meat from young sheep that are less than one year old. Although they are not consumed much in the North America but it is used in cooking some wonderful recipes throughout the world.

Health Benefits
A. Health benefits according to studies
1. Serum lipid profileIn the investigation of total and saturated fat intake in the management of high blood cholesterol levels for cardiovascular risk found that consumption of lean red meat (lamb) or lean white meat (chicken) as part of the usual diet is associated with a similar lipid response. These two foods can be exchanged in a healthy diet to increase palatability, according to "Effect of lean red meat from lamb v. lean white meat from chicken on the serum lipid profile: a randomised, cross-over study in women" by Mateo-Gallego R, Perez-Calahorra S, Cenarro A, Bea AM, Andres E, Horno J, Ros E, Civeira F.(a)

3 . Blood pressure
In the research of Low-sodium Dietary Approaches to Stop Hypertension (DASH) diets and its health effect found that a low-sodium DASH diet with a low dietary acid load, which also included lean red meat on most days of the week, was effective in reducing BP in older women, particularly in those taking antihypertensive medications, according to "Low-sodium Dietary Approaches to Stop Hypertension-type diet including lean red meat lowers blood pressure in postmenopausal women" by Nowson CA, Wattanapenpaiboon N, Pachett A.(c)

4. Good Sources of Nutrient
In the investigation of "Lean meat and heart health" found that lean red meat consumption has no effect on in vivo and ex vivo production of thromboxane and prostacyclin or the activity of haemostatic factors. It is also a good source of protein, omega-3 fatty acids, vitamin B12, niacin, zinc and iron. In conclusion, lean red meat, trimmed of visible fat, which is consumed in a diet low in saturated fat does not increase cardiovascular risk factors (plasma cholesterol levels or thrombotic risk factors), according to "Lean meat and heart health" by Li D, Siriamornpun S, Wahlqvist ML, Mann NJ, Sinclair AJ.(d)

B. Health benefits according to concentration
1. Tryptophan
Tryptophan is one of the 10 essential amino acids which the body uses to synthesize the proteins for brain cells need, thus enhancing the nerve cells in information transmitting between themselves and cells in the parts of the body that reduces the risk of anxiety and depression, according to the study of "The effects of tryptophan depletion on neural responses to emotional words in remitted depression" by Roiser JP, Levy J, Fromm SJ, Nugent AC, Talagala SL, Hasler G, Henn FA, Sahakian BJ, Drevets WC.(I)

2. Protein
In the research of the importance of dietary proteins influence body weight by affecting four targets for body weight regulation: satiety, thermogenesis, energy efficiency, and body composition, found that Ingestion of dietary proteins in diabetes type 1 exerts a delayed postprandial increase in blood glucose levels due to protein-induced stimulation of pancreatic glucagon secretion. Higher than minimal amounts of protein in the diet needed for nitrogen balance may play an important role for the increasing number of elderly obese subjects in our industrialized societies, since proteins exert beneficial effects in the conditions of overweight, metabolic syndrome, cardiovascular risk factors, bone health, and sarcopenia. Adverse effects of increased dietary proteins have been observed in subjects with renal impairment- this problem is frequently observed in the elderly, hypertensive, and diabetic population. Nevertheless, dietary proteins deserve more attention than they have received in the past, according to "Dietary proteins in obesity and in diabetes" by Keller U.(II)

3. Selenium
Lamp contains trace minerals selenium which is essential for the healthy function of the thyroid and immune system as it increases the antioxidant defense system by fighting against the forming of free radicals and reduce the risk of irregular cells growth causes of tumor and cancer, according to the study of "Selenium in the immune system" by Arthur JR, McKenzie RC, Beckett GJ., posted in PubMed (http://www.ncbi.nlm.nih.gov/pubmed/12730442)

4. Vitamin B12
Besides supporting the production of red blood cell and maintaining the proper duplication of DNA, the genetic material in all cells, according to the study of "Vitamin B 12 and the macromolecular composition of Euglena. II. Recovery from unbalanced growth induced by Vitamin B 12 deficiency" by Johnston PL, Carell EF., posted in PubMed (http://www.ncbi.nlm.nih.gov/pubmed/4633443), it also plays an important role in promoting neurite outgrowth, according to the study of "Akt/mammalian target of rapamycin signaling pathway regulates neurite outgrowth in cerebellar granule neurons stimulated by methylcobalamin" by Okada K, Tanaka H, Temporin K, Okamoto M, Kuroda Y, Moritomo H, Murase T, Yoshikawa H., posted in PuBmed (http://www.ncbi.nlm.nih.gov/pubmed/21458538)

5. Vitamin B3
Vitamin B3 or Niacin is essential for lowering high cholesterol levels, according to the study of "Cholesterol efflux potential and antiinflammatory properties of high-density lipoprotein after treatment with niacin or anacetrapib" by Yvan-Charvet L, Kling J, Pagler T, Li H, Hubbard B, Fisher T, Sparrow CP, Taggart AK, Tall AR., posted in PubMed (http://www.ncbi.nlm.nih.gov/pubmed/20448206), forming the components of cells' genetic material DNA during excision repair, according to the study of "Niacin deficiency delays DNA excision repair and increases spontaneous and nitrosourea-induced chromosomal instability in rat bone marrow" by
Kostecki LM, Thomas M, Linford G, Lizotte M, Toxopeus L, Bartleman AP, Kirkland JB., posted in PubMed (http://www.ncbi.nlm.nih.gov/pubmed/17618655) and treating diabetes and high blood sugar levels, according to the study of "Treatment of dyslipidemia in patients with type 2 diabetes" by Vijayaraghavan K., posted in PubMed (http://www.ncbi.nlm.nih.gov/pubmed/21172030), researcher indicated that a number of lipid-lowering agents, including statins, fibrates, niacin, and bile acid sequestrants, are available to target normalization of the entire lipid profile.

C. Other health benefits
1. Zinc
Zinc beside promote healthy immune system in fighting against the forming of free radical and guarding our body from infection and inflammation due to foreign invasion, according to the study of "Essential role of vitamin C and zinc in child immunity and health" by Maggini S, Wenzlaff S, Hornig D., posted in PubMed (1) it is also an essential trace mineral for prostate health in assisting the male reproduction system to maintain healthy sperm production and against prostate cancer, according to the study of "The role of survivin and Bcl-2 in zinc-induced apoptosis in prostate cancer cells" by Ku JH, Seo SY, Kwak C, Kim HH., posted in PubMed(2).

3. Iron
Iron is one of important mineral in forming complexes with molecular oxygen in hemoglobin, according to the study of "Glutathionyl Hemoglobin Is Elevated in Iron Deficiency Anemia" by Shet AS, Pinto SM, Mitra G, Mandal AK., posted in PubMed(4), thus helping to carry oxygen to the muscles for energy and enhancing the brain performance, including memory and concentration.

5. Mono-unsaturated fat
Lamb contains mono-unsaturated fat, that helps to reduce the risk of bad cholesterol accumulation in the blood stream, causing hypertension and heart diseases and stroke., according to the study of "Dietary fats and oils: technologies for improving cardiovascular health" by Flickinger BD, Huth PJ., posted in PubMed(5)

Side Effects
1. Saturated fat may cause clotting up of the arteries and vein.
2. Purines in lamp can cause the forming of kidney stone and problem for certain people.
3. Etc.