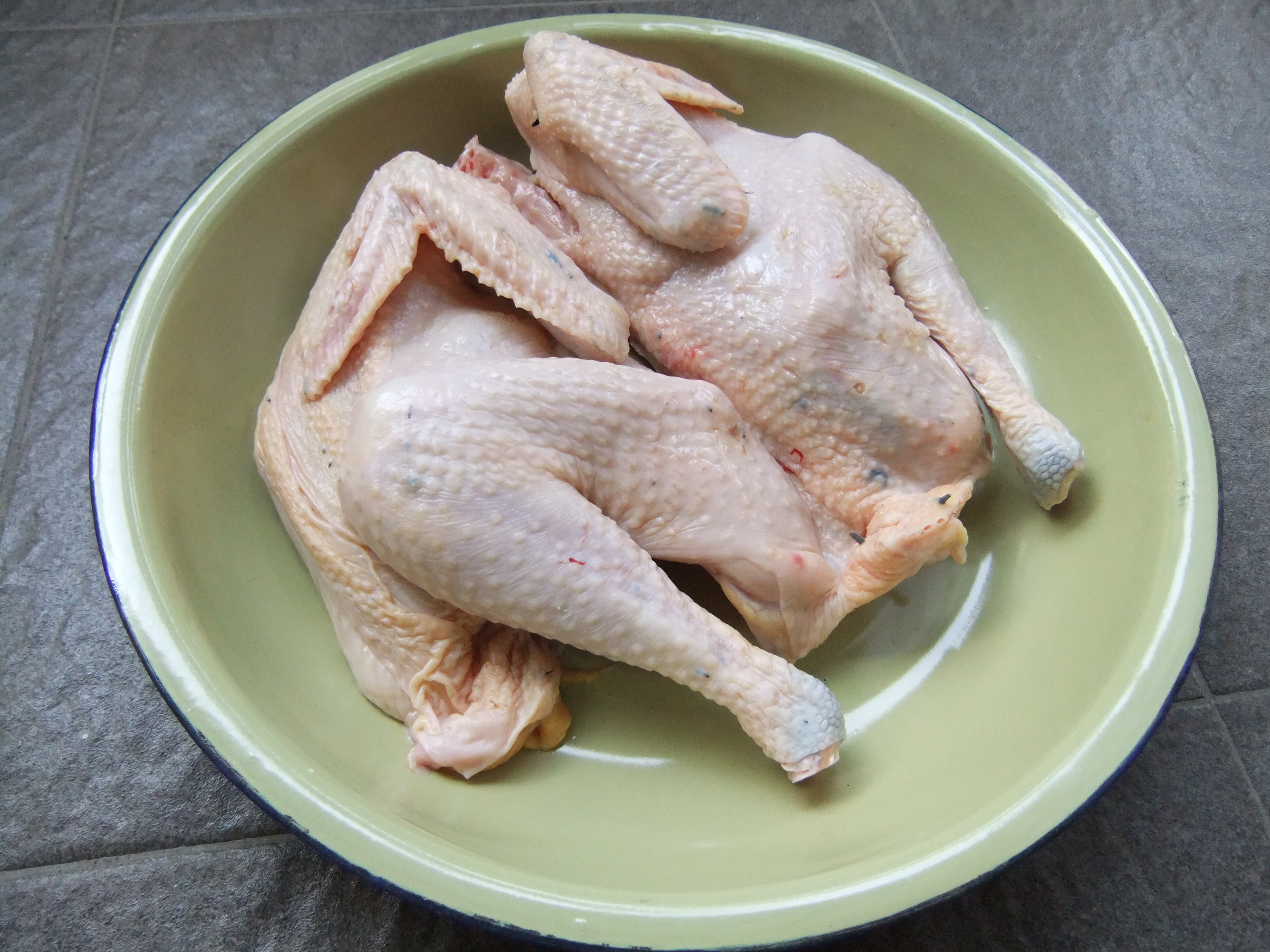 Chicken
Chicken are domesticated fowl belonging to the subspecies of Gallus domesticus and is raised all over the world for its delicious meats and eggs. It can be roasted, broiled, grilled or poached into a very delicious, tasteful and nutritious meal.

Nutritional Supplements
In order to prevent the high levels in take of saturated fat (bad cholesterol), it is recommended to remove the skin before cooking.
1. Proteins
2. Cholesterol (LDL and HDL)
3. Vitamin B3
4. Vitamin B6
5. Selenium
6. Phosphorus
7. Iron
8.Choline
9. Etc.

Health benefits
A. Health benefits according to studies
1. Vitamins and minerals
In the classification of protein hydrolysates. Calcium, phosphorus and iron were analyzed by inductively coupled-plasma atomic emission spectrophotometry; vitamin C was analyzed by the reduction of cupric ions and vitamins B1 and B2 by fluorescence in beef, chicken, and turkey found that the beef hydrolysate (BH) had more iron than the turkey hydrolysate (TH) and the chicken hydrolysate (CH); TH had a little more phosphorus. BH had the largest amount of vitamin C, and similar amounts of vitamins B1 and B2. The amount of these nutrients found in the hydrolysates suggests that it is possible to use them to enrich special dietary formulations, according to "Mineral and vitamin content of beef, chicken, and turkey hydrolysates mineral and vitamin content of protein hydrolysates" by Maria Elisabeth Machado Pinto e SilvaI, Ive PatonI, Marlene TrigoI; Maria Carolina B. C. von AtzingenI, Carmem S. KiraII, Emiko I. InomataII, Leda C. A. LamardoII(a)

2. Hypercholesterolemia
In the research of the contribution of beef, pork, lamb, and veal to total fat, saturated fat, and cholesterol intake from a total-diet standpoint found that Substituting skinless chicken or fish for meat may make sense from the standpoint of personal preference and dietary variety but does not confer additional benefits in terms of reducing blood cholesterol levels, according to "Hypercholesterolemia. Dietary advice for patients regarding meat" by Keenan JM, Morris DH.(b)

3. Iron and zinc
In the evaluation of Reducing red meat intake to lower serum cholesterol may also lower iron and zinc intake found that although serum ferritin level change between baseline and intervention was significantly different between the lean beef and lean poultry and fish groups (median [interquartile range] 0.7 [-6, 8] and -6.8 [-12, 2] microg/dL, respectively), the drop in the lean poultry and fish group was not clinically significant. No differences were observed in iron and zinc intake or in serum zinc and cholesterol levels. Teenagers eating diets low in saturated fat may benefit from adequate amounts of lean red meat, according to "Adolescents eating diets rich in either lean beef or lean poultry and fish reduced fat and saturated fat intake and those eating beef maintained serum ferritin status" by Snetselaar L, Stumbo P, Chenard C, Ahrens L, Smith K, Zimmerman B.(c)

4. Nutrients
In the investigation of food selection of the healthy elderly may be influenced by life-styles, the food supply, and recommendations related to diet and disease found that a moderate but not excessive intake of meat/poultry/fish made a substantial contribution to nutrient intake. The fat contribution of these food groups could be decreased by emphasizing lower-fat selections of meat, poultry, and fish, according to "Meat, poultry, and fish consumption and nutrient intake in the healthy elderly" by Koehler KM, Hunt WC, Garry PJ.(d)

B. Health benefits according to concentration
1. Vitamin B complex


a) Vitamin B2 or Riboflavin is one of very important vitamin in metabolism of energy by helping the transforming of fats, proteins and carbohydrates and high dose riboflavin appears to be useful alone or along with beta-blockers in the prevention of migraine, according to the study of "Effectiveness of high-dose riboflavin in migraine prophylaxis. A randomized controlled trial" by Schoenen J, Jacquy J, Lenaerts M., posted in PubMed (http://www.ncbi.nlm.nih.gov/pubmed/9484373)

b) Vitamin B3
Vitamin B3 or Niacin is essential for lowering high cholesterol levels, according to the study of "Cholesterol efflux potential and antiinflammatory properties of high-density lipoprotein after treatment with niacin or anacetrapib" by Yvan-Charvet L, Kling J, Pagler T, Li H, Hubbard B, Fisher T, Sparrow CP, Taggart AK, Tall AR., posted in PubMed (http://www.ncbi.nlm.nih.gov/pubmed/20448206), forming the components of cells' genetic material DNA during excision repair, according to the study of "Niacin deficiency delays DNA excision repair and increases spontaneous and nitrosourea-induced chromosomal instability in rat bone marrow" by
Kostecki LM, Thomas M, Linford G, Lizotte M, Toxopeus L, Bartleman AP, Kirkland JB., posted in PubMed (http://www.ncbi.nlm.nih.gov/pubmed/17618655) and treating diabetes and high blood sugar levels, according to the study of "Treatment of dyslipidemia in patients with type 2 diabetes" by Vijayaraghavan K., posted in PubMed (http://www.ncbi.nlm.nih.gov/pubmed/21172030), researcher indicated that a number of lipid-lowering agents, including statins, fibrates, niacin, and bile acid sequestrants, are available to target normalization of the entire lipid profile.
c) Vitamin B6
c. 1. Vitamin B6 or Pyridoxine beside is important in enhancing the developing red blood cells by stimulating the production of hemoglobin, it also helps to keep blood sugar levels steady during the process of breaking down stored energy in gestation pregnancy, according to the study of "Improvement of oral glucose tolerance in gestational diabetes by pyridoxine" by Bennink HJ, Schreurs WH., posted in PubMed (http://www.ncbi.nlm.nih.gov/pubmed/1131652)

c.2. It also plays a pivotal role as a methyl donor in the basic cellular process of methylation, through which methyl groups are transferred from one molecule to another, resulting in the formation of a wide variety of precess, including regulation of gene expression, protein function, and RNA metabolism. When levels of B6 are inadequate, it may cause faulty Methylation with high levels of homocysteine that can cause variety of disease, including cervical dysplasia, faulty detoxification and impaired DNA repair, etc., according to the study of "Back To Life Natural Health Center - Healthcare Through Natural Methods"(http://www.backtolifehealth.com/Methylation.htm)

d) Vitamin B12In the evaluation of vitamin B12 in Turnip greens found that vitamin Bi2 was present in the
leaves of a higher plant in amounts. there is no evidence supporting the synthesis of vitamin Bi2 by a higher plant. Was it produced by soil microorganisms and subsequently absorbed via the plant roots? There is ample proof of such synthetic activity by certain microorganisms and of vitamin B12 activity in soil , but no evidence that the vitamin B]2molecule is absorbed by the plant from the soil. Could it have been produced by bacteria living epiphytically
on the turnip leaf? Ericson and Lewis ('54) postulated such a relationship in their studies of vitamin Bt2 compounds found in certain algae, according to "STUDIES OF VITAMIN B12IN TUENIP GREENS" by LOUISE F. GEAY ANDLOUISE J. DANIEL(http://jn.nutrition.org/content/67/4/623.full.pdf)

3. Iron
Beside as a mineral in carrying life-giving oxygen to human blood cells and maintaining robust health as an essential protein component for metabolism, it also helps in synthesis of a number of essential neurotransmitters like dopamine, nor-epinephrine, along with serotonin. acccording to the study of "Brain Iron Dysregulation and the Risk of Ageing White Matter Lesions" by Gebril OH, Simpson JE, Kirby J, Brayne C, Ince PG., posted in PubMed, researchers found that The mRNA expression using QPCR suggests a pattern that favours decreased intracellular iron influx, increased ferrous oxidation and increased iron export from the cells. Iron metabolism seems to be changed in brains with WML, increased elemental iron in these brains and in turn increased production of free oxidative radicals could represent a potentiating factor for the development of ageing WML.

5. phosphorus
Phosphorus is one of essential trace minerals to maintains healthy teeth and bones, according to the study of "Phosphorus nutrition and the treatment of osteoporosis" by Heaney RP, posted in PubMed (II).

6. Calcium
In the investigation of micronutrients, calcium (Ca) and inorganic (i) phosphate (P) ,the two main constituents of hydroxyapatite and theirs effect on bone health found that they are endowed with a transport system that accumulates Pi inside the matrix vesicles, followed by the influx of Ca ions. This process leads to the formation of hydroxyapatite crystal and its subsequent association with the organic matrix collagen fibrils. In addition to this structural role, both Ca and Pi positively influence the activity of bone-forming and bone-resorbing cells. Pi plays a role in the maturation of osteocytes, the most abundant cells in bone. Osteocytes are implicated in bone mineralization and systemic Pi homeostasis, according to "Calcium and phosphate: a duet of ions playing for bone health" by Bonjour JP.(III)

C. Other health benefits
1. Cholesterol
The chicken of skin contains about 50 - 50 good and bad cholesterol. We know that cholesterol good or bad are necessary for keeping good health for all the cells in the body, including brain cells, according to the study of "Liposome formulated with TAT-modified cholesterol for improving brain delivery and therapeutic efficacy on brain glioma in animals" by Qin Y, Chen H, Zhang Q, Wang X, Yuan W, Kuai R, Tang J, Zhang L, Zhang Z, Zhang Q, Liu J, He Q., posted in PubMed(1) Too much of bad cholesterol can cause clotting up the arteries and veins and hardening the arterial walls, leading to break off or blocking the flow, causing heart disease and stroke, according to the study of "Dietary fat and cholesterol and risk of cardiovascular disease in older adults: the Health ABC Study" by Houston DK, Ding J, Lee JS, Garcia M, Kanaya AM, Tylavsky FA, Newman AB, Visser M, Kritchevsky SB; Health ABC Study, posted in PubMed(2). It is advised that people with high levels of bad cholesterol should avoid to eat chicken and replace it with plant base cholesterol.

2. Reduce the risk of cancer
B vitamin- niacin is important component of the enzyme systems that repair broken DNA molecules. Deficiency of niacin can cause genetic DNA damage, leading to cancer, according to the study of "Niacin deficiency and cancer in women" by Jacobson EL., posted in PubMed(3), the researchers wrote that Studies of the consequences of DNA damage in cultured mouse and human cells as a function of niacin status have supported the hypothesis that niacin may be a protective factor that limits carcinogenic events.

3. Antioxidant
Since it contain high levels of selenium which the essential trace minerals necessary for the major metabolic pathways and immune system in fighting against the forming of free radicals and prevent the invasion of foreign virus and bacteria, causing irregular cells growth, infection and inflammation, according to the study of "Selenium in the immune system" by Arthur JR, McKenzie RC, Beckett GJ., posted in PubMed(4)

5. Collagen
Collagen from the chicken leg, a fibrous protein, is used to connect and support other body tissues, has an ability to act as an ACE inhibitor in reducing blood pressure in people with hypertension, acording to the study of "Therapeutic effects of marine collagen peptides on Chinese patients with type 2 diabetes mellitus and primary hypertension" by Zhu CF, Li GZ, Peng HB, Zhang F, Chen Y, Li Y, posted in PubMed(5), researchers wrote that MCPs(Marine collagen peptides) supplement may benefit glucose and lipid metabolism, insulin sensitivity, renal function and hypertension management in Chinese patients with T2DM and hypertension
6. Etc.

Side Effects
1. Increases the risk of heart attack and stoke, due to bad cholesterol.
2. Purines in all meat, including chicken can cause health problems in some individuals due to excess of uric acid.
3. Etc.


Super foods Library, Eat Yourself Healthy With The Best of the Best Nature Has to Offer