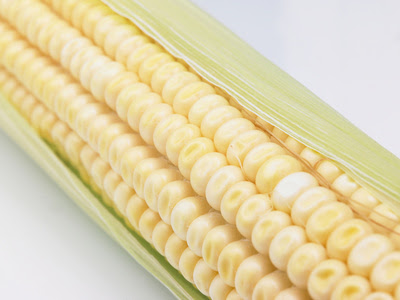 Corn
Corn is a variety of maize with a high sugar content and prepared as a vegetable. It is a tall plant grass that has large ears with many seeds or kernels. Because of its commercial values, it has been growth in suitable climate all over the world for human consumption and animal foods.

Health benefits
A. Health Benefits according to studies
1. Oxidative Stress
In the determination of the contents of total polyphenols, flavonoids, flavonols, flavanols, and anthocyanins of purple corn (Zea mays L.) extracts and their anti oxidative stress found that extract contained various bioactive phenolic compounds that exhibited considerable in vitro antioxidant activity, which correlated well with the decreased MDA formation and increase in activity of endogenous antioxidant enzymes observed in the isolated mouse organs, according to "Purple Corn (Zea mays L.) Phenolic Compounds Profile and Its Assessment as an Agent Against Oxidative Stress in Isolated Mouse Organs" by Ramos-Escudero F, Mu Oz AM, Alvarado-Ort Z C, Alvarado N, Y Ez JA.(a)

4. Carotenoid
In the analyzing the nutritional value of staple crops, such as rice (Oryza sativa), maize (Zea mays) and potato (Solanum tuberosum) and its seed Carotenoid found that By focusing on different steps in the carotenoid biosynthesis pathway, it is also possible to generate plants with enhanced levels of several nutritionally-beneficial carotenoid molecules simultaneously, according to the study of "Nutritious crops producing multiple carotenoids--a metabolic balancing act" by Farré G, Bai C, Twyman RM, Capell T, Christou P, Zhu C.(d)

B. Health Benefits according to the concentration
1. Vitamin B1 (Thiamine or thiamin)
With the concentration of 25% in one cup of corn, corn may be beneficial in preventing and treating Diabetes and Heart Disease as vitamin B1 analog benfotiamine (BFT) improved cardiac perfusion and reduced cardiomyocyte apoptosis and interstitial fibrosis. In hearts of untreated diabetic mice, the expression and activity of Akt/Pim-1 signaling declined along with O-N-acetylglucosamine modification of Akt, inhibition of pentose phosphate pathway, activation of oxidative stress, and accumulation of glycation end products, according to the study of "Vitamin B1 analog benfotiamine prevents diabetes-induced diastolic dysfunction and heart failure through Akt/Pim-1-mediated survival pathway" by Katare RG, Caporali A, Oikawa A, Meloni M, Emanueli C, Madeddu P.(1)

2. Folate
In the investigation of the prevalence and multifactorial etiology of anemia among Indian human immunodeficiency virus (HIV)-infected children and its effect on anemia, found that Anemia, particularly iron deficiency anemia and anemia of inflammation, is highly prevalent among children with HIV infection. Micronutrient supplements (iron and, folate) combined with ART(antiretroviral therapy) improved anemia in HIV-infected children, according to "The prevalence and etiology of anemia among HIV-infected children in India" by Shet A, Arumugam K, Rajagopalan N, Dinakar C, Krishnamurthy S, Mehta S, Shet AS.(2)

3. Dietary fibers
Daily intake of right amount of fibers can prvent and treat
a. Diabetes, as Increased consumption of vegetables, whole grains, and soluble and insoluble fiber is associated with improved glucose metabolism in both diabetic and nondiabetic individuals. Improvements in insulin sensitivity and glucose homeostasis were more evident in participants following a plant-based diet compared with other commonly used diets, according to the study of "Efficacy of high-fiber diets in the management of type 2 diabetes mellitus" by Wolfram T, Ismail-Beigi F.(3)

b. Cholesterol and cardivascular diseases, as the soluble fiber content of legumes and vegetables has also been shown to decrease LDL-C. Current investigations continue to explore this area in depth and examine potential synergies between dietary fiber and other phytochemicals that may lower cholesterol, according to the study of "Effects of soluble dietary fiber on low-density lipoprotein cholesterol and coronary heart disease risk" by Bazzano LA.(4)

4. Vitamin C
In the evaluation of pulmonary dysfunction. and it effects on pulmonary dysfunction found that At present, evidence from randomised-controlled trials is insufficient to recommend a specific role for vitamin C in the treatment of asthma. Further methodologically strong and large-scale randomised controlled trials are needed in order to address the question of the effectiveness of vitamin C in children with asthma but some outcome data showed effectiveness on lung function, symptom scores, IgE levels and inhaled steroid use. One small study showed a significant difference in % drop in FEV1 post-exercise, according to the study of "Vitamin C supplementation for asthma" by Kaur B, Rowe BH, Arnold E.(5)

C. Other health benefits
1. L-Arginine
L-Arginine besides is a basic component in all cells and the building blocks of protein, it also
is important for nitric oxide synthesis that helps the blood vessel to relax and increases blood flow through out the body, including the reprodtive oragans and heart , thus reducing the risk of infertility (according to the study of "[Effect of L-arginine and polyamines on sperm motility].
[Article in Spanish]" byMéndez JD, Hernández MP., posted in PubMed (http://www.ncbi.nlm.nih.gov/pubmed/8359705), researchers indicated that It has been suggested that these polyamines have important role as initiators in the spermatic motility processes. Some practical uses for L-arginine are proposed) and heart diseases (according to the study of "Therapeutic role of L-arginine on free radical scavenging system in ischemic heart diseases" by Tripathi P, Misra MK., Posted in PubMed (http://www.ncbi.nlm.nih.gov/pubmed/20361713) researchers concluded that The present study demonstrates that L-arginine administration may be beneficial to patients with myocardial ischemic disorders, such as acute myocardial infarction and acute angina

2. Threonine
As an essential amino acid, threonine not only helps to reduce the liver fat, but also enhances the balancing of immune system in terms of antibody production to protect from infection and inflammation caused by wound or cut, according to the article of Threonine posted in healthvitaminsguide.com (http://www.healthvitaminsguide.com/aminoacids/threonine.htm)

3. Lysine
Beside promoting bone growth and development by enhancing the body in absorption of calcium (according to the stdy of "Increased metabolism of bone collagen in post-menopausal female osteoporotic femoral heads" Mansell JP, Bailey AJ., posted in PubMed (http://www.ncbi.nlm.nih.gov/pubmed/12565712) it also helps to build muscle protein and repair tissues, if used combination with vitamin C. (according to the study of "Extracellular matrix-mediated control of aortic smooth muscle cell growth and migration by a combination of ascorbic acid, lysine, proline, and catechins" by Ivanov V, Ivanova S, Roomi MW, Kalinovsky T, Niedzwiecki A, Rath M., posted in PubMed (http://www.ncbi.nlm.nih.gov/pubmed/18030064)

4. Methionine
Beside helping to helps break down the fatty acids to prevent plague clotting up the arterial walls, it also promotes the immune function in fighting against the forming of free radicals and normalize the body metabolism and growth, according to the study of "Methioninase: a therapeutic for diseases related to altered methionine metabolism and transmethylation: cancer, heart disease, obesity, aging, and Parkinson's disease" by Hoffman RM, posted in PubMed (http://www.ncbi.nlm.nih.gov/pubmed/9234067), researchers wrote that Most importantly, we review and hypothesize how the developing therapeutic recombination methioninase (rMETase) can be utilized to cure or prevent all of these diseases.

5. Phenylalanine
Phenylalanine is not said to be effective in treating chronic pain (according to the article of "Analgesic effectiveness of D-phenylalanine in chronic pain patients" by Walsh NE, Ramamurthy S, Schoenfeld L, Hoffman J.posted in PubMed (but also prevents the dvelopment of depression., according to the study of "Precursor control of neurotransmitter synthesis" by Wurtman RJ, Hefti F, Melamed E., posted in PubMed (http://www.ncbi.nlm.nih.gov/pubmed/6115400)

Side effect
1. Since it is grow for commercial profit corn may be genetic modifying, and the side effects are still unknown
2. Etc.