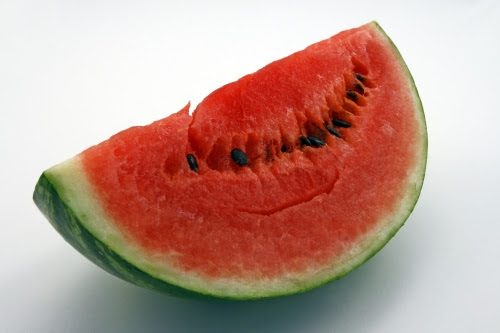 WatermelonWatermelon is species of Citrullus, belong to the family Cucurbitaceae, related to the cantaloupe, squash and pumpkin and originated from southern Africa. Today watermelon is cultivated all over the world as a healthy food and for commercial purpose.

B. Health benefits according to concentration
1. Vitamin C
Besides is essential in preventing the breaking off small vein cause of hardening of the vessel wall, vitamin C also improves the digestive system in maximum absorption of vital nutrients. Overdoses can cause diarrhea, It also plays an important role in enhancing immune system fighting against the forming of free radicals that cause muscle damage, according to the study of "Does antioxidant vitamin supplementation protect against muscle damage?" by McGinley C, Shafat A, Donnelly AE., posted in PubMed (http://www.ncbi.nlm.nih.gov/pubmed/19902983)

2. Vitamin A
As famous in improving eye sight, vitamin A also plays an important role in enhancing immune system fighting against the forming of free radicals that cause tissue, muscle and cellular damage and infection, according to the study of "Vitamin A, immunity, and infection" by Semba RD., posted in PubMed (http://www.ncbi.nlm.nih.gov/pubmed/21775644), researchers found that vitamin A and its metabolites are immune enhancers that have been shown to potentiate antibody responses to T cell-dependent antigens, increase lymphocyte proliferation responses to antigens and mitogens, inhibit apoptosis, and restore the integrity and function of mucosal surfaces. Vitamin A and related retinoids may have potential applications in therapy for some infectious diseases.

3. Potassium
Beside is a important minerals for lymphatic function in regulating the body fluids, it is also essential in preventing the forming of kidney stone, according to the study of "Empiric use of potassium citrate reduces kidney-stone incidence with the ketogenic diet" by McNally MA, Pyzik PL, Rubenstein JE, Hamdy RF, Kossoff EH., posted in PubMed(http://www.ncbi.nlm.nih.gov/pubmed/19596731), researchers wrote in conclusion that Oral potassium citrate is an effective preventive supplement against kidney stones in children who receive the KD, achieving its goal of urine alkalinization. Universal supplementation is warranted.

4. Magnesium
Magnesium not only important for bone health, according to the study of "Magnesium, zinc, copper, manganese, and selenium levels in postmenopausal women with osteoporosis. Can magnesium play a key role in osteoporosis?" by Odabasi E, Turan M, Aydin A, Akay C, Kutlu M(3) but also play and important role in protecting against Alzheimer's disease, according to the study of "Altered ionized magnesium levels in mild-to-moderate Alzheimer's disease" by Barbagallo M, Belvedere M, Di Bella G, Dominguez LJ.(4)

C. Other health benefits
1. Lycopene
After absorbing from foods through digestion, lycopene is transported into the blood then accumulated in the liver, adrenal glands, and testes. It is one most powerful phytochemical in preventing the forming of free radicals, resulting in lessening the risk of tumors and cancers, According to the study of `Can the consumption of tomatoes or lycopene reduce cancer risk?` by
Hwang ES, Bowen PE. (Source fromDepartment of Human Nutrition (M/C 517), 1919 W. Taylor Street, University of Illinois at Chicago, Chicago, IL 60612, USA.) posted in PubMed, researchers indicated that Data suggest lycopene may account for or contribute to chemoprevention, but this hypothesis requires further study. Numerous other potentially beneficial compounds are present in tomatoes and complex interactions among multiple components may contribute to the anticancer properties of tomatoes.

3. Erectile dysfunction
Since water contains high amount of zinc, it enhances the function of prostate grand in serving its purpose of assisting the test in sperm production and preventing erectile dysfunction, according to the study of "Zinc, hydrochlorothiazide and sexual dysfunction" by Khedun SM, Naicker T, Maharaj B., posted in PubMed (http://www.ncbi.nlm.nih.gov/pubmed/8556776)

Side effects
No side effect is known, but watermelon has glycemic load per food serving of 4, you may want to limit the quantity you intend to eat, if you have high blood sugar.