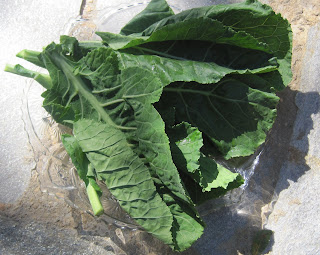 Collard Green
Collard Green is Aspecies of Brassica Oleracea, belongs to the family Brassicaceae with unknown origin. Today, the plant is cultivated commercially for its its thick, slightly bitter edible leaves.

3. Antioxidant capacity
In the identification of Seeds of Brassica oleracea var. acephala (kale) by HPLC/UV-PAD/MSn-ESI and their antioxidants effect found that presence of sinapine, an analogue of acetylcholine, only in seed materials. A strong concentration-dependent antioxidant capacity against DPPH, nitric oxide, and superoxide radicals was observed for kale seeds. according to "Metabolic and bioactivity insights into Brassica oleracea var. acephala" by

B. Health Benefits according to concentration
1. Vitamin K
Vitamin K beside is best known for its function in aiding coagulation, it also assists the digestive system in absorption of calcium content from food, thus enhancing formation and maintenance of healthy bones, according to the study of "Ultrasound bone mass in patients undergoing chronic therapy with oral anticoagulants" by Rey-Sanchez P, Lavado-Garcia JM, Canal-Macias ML, Rodriguez-Dominguez MT, Bote-Mohedano JL, Pedrera-Zamorano JD., posted in PubMed (http://www.ncbi.nlm.nih.gov/pubmed/21234621)

2. Vitamin A
As famous in improving eye sight, vitamin A also plays an important role in enhancing immune system fighting against the forming of free radicals that cause tissue, muscle and cellular damage and infection, according to the study of "Vitamin A, immunity, and infection" by Semba RD., posted in PubMed (http://www.ncbi.nlm.nih.gov/pubmed/21775644), researchers found that vitamin A and its metabolites are immune enhancers that have been shown to potentiate antibody responses to T cell-dependent antigens, increase lymphocyte proliferation responses to antigens and mitogens, inhibit apoptosis, and restore the integrity and function of mucosal surfaces. Vitamin A and related retinoids may have potential applications in therapy for some infectious diseases.

3. Vitamin C
In the evaluation of pulmonary dysfunction. and it effects on pulmonary dysfunction found that At present, evidence from randomised-controlled trials is insufficient to recommend a specific role for vitamin C in the treatment of asthma. Further methodologically strong and large-scale randomised controlled trials are needed in order to address the question of the effectiveness of vitamin C in children with asthma but some outcome data showed effectiveness on lung function, symptom scores, IgE levels and inhaled steroid use. One small study showed a significant difference in % drop in FEV1 post-exercise, according to the study of "Vitamin C supplementation for asthma" by Kaur B, Rowe BH, Arnold E.(I)

4. Folate
In the investigation of the prevalence and multifactorial etiology of anemia among Indian human immunodeficiency virus (HIV)-infected children and its effect on anemia, found that Anemia, particularly iron deficiency anemia and anemia of inflammation, is highly prevalent among children with HIV infection. Micronutrient supplements (iron and, folate) combined with ART(antiretroviral therapy) improved anemia in HIV-infected children, according to "The prevalence and etiology of anemia among HIV-infected children in India" by Shet A, Arumugam K, Rajagopalan N, Dinakar C, Krishnamurthy S, Mehta S, Shet AS.(II)

5. Manganese
It is one of important trace in preventing osteoporosis, according to the study of "[Study of estrogen deficiency impact on manganese levels in teeth and mandible of rats after ovariectomy]. [Article in Polish]" by Rahnama M, Błoniarz J, Zareba S, Swiatkowski W.(1)and regulating blood sugar level, according to the study of "[An inadequate intake of manganese may favour insulin resistance in girls]. [Article in Spanish]" by Rodríguez-Rodríguez E, Bermejo LM, López-Sobaler AM, Ortega RM.(III)

2. Phytonutrients
Since it is belong the group of cruciferous vegetables, its phytonutrient help to enhance the propduction of plant base estrogen that not only reduces the estrogen produced by the women body by occupying the estrogen receptor sites, according to the study of "Promoting health among perimenopausal women through diet and exercise" by Lange-Collett J., posted in PubMed(2), but also helps to fight against metabolic syndrome, according to the study of "Effect of fruit and vegetable concentrates on endothelial function in metabolic syndrome: a randomized controlled trial" by Ali A, Yazaki Y, Njike VY, Ma Y, Katz DL., posted in PubMed(3)

3. OsteroporosisCollard Greens also promote strong bone due to enhancing the absorption calcium by maintaining the ratio of calcium and magesium, according to the study of "Nutritional status among postmenopausal osteoporotic women in North West of Iran" by Hejazi J, Mohtadinia J, Kolahi S, Ebrahimi-Mamaghani M., posted in PubMed(4)

4. Emphysema
Emphysema is a disease of the lung's air sacs called alveoli. Researcher found that cigarette smoking on the lungs of mice causes the develop of emphysema if they had vitamin A deficiency according to the study of "Vitamin A depletion induced by cigarette smoke is associated with the development of emphysema in rats" by Li T, Molteni A, Latkovich P, Castellani W, Baybutt RC. , posted PubMed(5)

5. Cardiovascular healthOmega 3 fatty acid helps to balance the ratio of cholesterol that reduces the risk of cholesterol building up cause of thickening of arterial wall, leading to heart diseases according to the study of "Fish oil and omega-3 fatty acids in cardiovascular disease: do they really work?" by Kromhout D, Yasuda S, Geleijnse JM, Shimokawa H., posted in PubMed(6)

Side Effects
1. Collard green may causes oxilative effect for people with kidney diseases and reduce our body in absorption of calcium
2. No other side effect is known