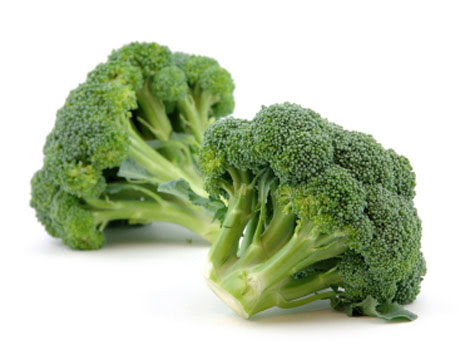 Broccoli
Broccoli is a mustard/cabbage plant, belong to the family Brassicaceae. It has large flower heads, usually green in color and the mass of flower heads is surrounded by leaves and evolved from a wild cabbage plant on the continent of Europe.

Health Benefits
A. Health benefits according to studies
1. Potential health benefits
In the investigation of cruciferous vegetables which include broccoli, cabbage and cauliflower and theirs bioactive components in functional foods effect for the improvement of health found that the molecular basis of the biological activities of the chemicals present in broccoli potentially responsible for health promotion, from chemoprevention to cardio protection, are outlined based on in vitro and in vivo studies with a note on the structure activity relationship of sulforaphane and a few other isothiocyanates, according to "Potential health benefits of broccoli- a chemico-biological overview" by Vasanthi HR, Mukherjee S, Das DK.(a)

2. Chemical carcinogens
In the classification of edible plants belonging to the family Cruciferae and genus Brassica (e.g., broccoli and cauliflower) and its isothiocyanates (mostly in the form of their glucosinolate precursors) effect found that sprouts of many broccoli cultivars contain negligible quantities of indole glucosinolates, which predominate in the mature vegetable and may give rise to degradation products (e.g., indole-3-carbinol) that can enhance tumorigenesis. Hence, small quantities of crucifer sprouts may protect against the risk of cancer as effectively as much larger quantities of mature vegetables of the same variety, according to "Broccoli sprouts: an exceptionally rich source of inducers of enzymes that protect against chemical carcinogens" by Fahey JW, Zhang Y, Talalay P.(b)

3. Anti cancers
In the evaluation of consumption of cruciferous vegetables (compared with total fruit and vegetable consumption) and its effect in reducing cancer risk at several organ sites found that these experiments provide very strong evidence for a major role of phase 2 enzymes in controlling the risk of exposure to carcinogens. An increasing number of phase 2 proteins that exert a variety of protective mechanisms are being identified. Thus, in addition to detoxifying electrophiles, these proteins exercise versatile, long-lasting and catalytic antioxidant protection, according to "Phytochemicals from cruciferous plants protect against cancer by modulating carcinogen metabolism" by Talalay P, Fahey JW.(c)

B. Health benefits according to concentration
1. Vitamin C
In the evaluation of pulmonary dysfunction. and it effects on pulmonary dysfunction found that At present, evidence from randomised-controlled trials is insufficient to recommend a specific role for vitamin C in the treatment of asthma. Further methodologically strong and large-scale randomised controlled trials are needed in order to address the question of the effectiveness of vitamin C in children with asthma but some outcome data showed effectiveness on lung function, symptom scores, IgE levels and inhaled steroid use. One small study showed a significant difference in % drop in FEV1 post-exercise, according to the study of "Vitamin C supplementation for asthma" by Kaur B, Rowe BH, Arnold E.(I)

3. Folate
Folate beside is important for the production of red blood cells, and for the proper development of the brain, it also helps to enhance the replication and maintain DNA and RNA, thus reducing the risk of birth defects, in a study of "Go folic!" by Bland J., posted in PubMed, researchers state that in order to prevent neural tube defects (NTDs), and proactively prevent new cases of spina bifida and hydrocephalus, it is essential that women take folic acid well before becoming pregnant. Through the use of social networks, and the voice of healthcare professionals, it is hoped that more women than ever before will receive the Go Folic! message and start taking the 400mcg/day required to ensure the development of a healthy brain and spine.

4. Vitamin A
Vitamin A is not only important in preventing types I diabetes, according to "A close relationship between type 1 diabetes and vitamin A-deficiency and matrix metalloproteinase and hyaluronidase activities in skin tissues" by Takahashi N, Takasu S.(1) but also may be associated with compromised bone health, according to "Vitamins and bone health: beyond calcium and vitamin D" by Ahmadieh H, Arabi A.(IV)

5. Manganese
Manganese beside plays an vital role for the proper and normal growth of human bone structure (accodring to the study of "Bone formation within alumina tubes: effect of calcium, manganese, and chromium dopants" by Pabbruwe MB, Standard OC, Sorrell CC, Howlett CR., posted in PubMed (http://www.ncbi.nlm.nih.gov/pubmed/15109850)), it also helps to reduce the risk of cancer, (according to the study of "The effects of 3, 4 or 5 amino salicylic acids on manganese-induced neuronal death: ER stress and mitochondrial complexes" by Yoon H, Lee GH, Kim DS, Kim KW, Kim HR, Chae HJ., posted in PubMed (http://www.ncbi.nlm.nih.gov/pubmed/21477646 researchers indicated that the salicylate analogues and the antioxidants did not mediate ER stress in this model. The salicylate analogues reduced reactive oxygen species (ROS) and reversed the deficient mitochondrial membrane potential that was induced by Mn. Taken together, the 3, 4, 5 ASA worked in a similar way, regulating the Mn-induced mitochondrial dysfunction and protecting cells.

2. Free radicals
Broccoli helps to fight against the forming of free radical by detoxificating and cleansing the toxins accumulated in the body, according to "Effect of broccoli (Brassica oleracea) and its phytochemical sulforaphane in balanced diets on the detoxification enzymes levels of tilapia (Oreochromis niloticus) exposed to a carcinogenic and mutagenic pollutant" by Villa-Cruz V, Davila J, Viana MT, Vazquez-Duhalt R.(2)

3. Diabetes
Since it contains high amount of fiber, it helps to improve the digestive system in carbohydrate metabolism by releasing the sugar slowly into blood stream that reduces the pancrease stress cause of insulin sensitive, according to 'Broccoli sprouts reduce oxidative stress in type 2 diabetes: a randomized double-blind clinical trial" by Bahadoran Z, Mirmiran P, Hosseinpanah F, Hedayati M, Hosseinpour-Niazi S, Azizi F.(3)

4. Coagulation
Since it contains high amount of vitamin K, it helps to protect the underlayer of skin and prevent the skin damage caused by ultra violet sun light. Vitamin K also has a coagulative effect, according to "Vitamin K-dependent coagulation factors deficiency" by Brenner B, Kuperman AA, Watzka M, Oldenburg J.(4)

Side effects
1. People who has over production of IgM immunoglobulins which makes blood thicken should talk to their doctor before taking high amount of broccoli.
2. Allergic reaction??
3. Etc.
Chinese Secrets To Fatty Liver And Obesity Reversal
Use The Revolutionary Findings To Achieve
Optimal Health And Loose Weight