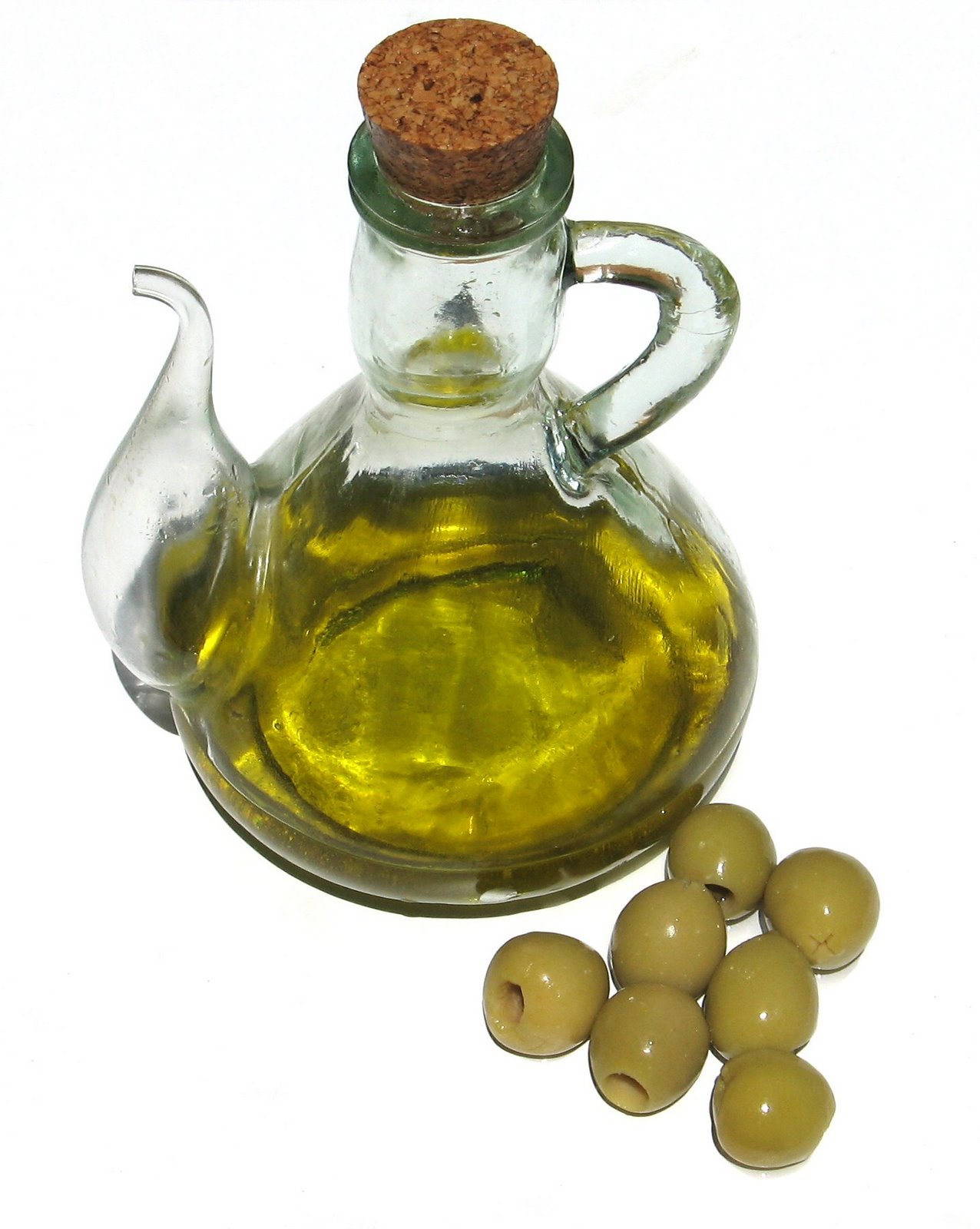 Olive Oil
Olive is belongs to the the family Oleaceae, native to the coastal areas of the eastern Mediterranean Basin and south end of the Caspian Sea. Its fruit, is also called the olive and the source of olive oil.

2. Olive oil phenolics
In the evaluation of the olive oil phenolics of the Mediterranean diet and its lower incidence of atherosclerosis, cardiovascular disease, and certain types of cancer, found that olive oil phenolics have positive effects on certain physiological parameters, such as plasma lipoproteins, oxidative damage, inflammatory markers, platelet and cellular function, and antimicrobial activity, according to "Chemistry and health of olive oil phenolics" by Cicerale S, Conlan XA, Sinclair AJ, Keast RS.(b)

4. Anti cancers
In assessment of the intake of olive oil in daily diet and its anti-cancers effect found that compared with the lowest, the highest category of olive oil consumption was associated with lower odds of having any type of cancer (log odds ratio = -0.41, 95%CI -0.53, -0.29, Cohran's Q = 47.52, p = 0.0002, I-sq = 62%); the latter was irrespective of the country of origin (Mediterranean or non-Mediterranean). Moreover, olive oil consumption was associated with lower odds of developing breast cancer (logOR = -0,45 95%CI -0.78 to -0.12), and a cancer of the digestive system (logOR = -0,36 95%CI -0.50 to -0.21), compared with the lowest intake, maccording to "Olive oil intake is inversely related to cancer prevalence: a systematic review and a meta-analysis of 13,800 patients and 23,340 controls in 19 observational studies" by Psaltopoulou T, Kosti RI, Haidopoulos D, Dimopoulos M, Panagiotakos DB.(d)

5. Healthy effect of virgin olive oil
According to "International conference on the healthy effect of virgin olive oil" by
Perez-Jimenez F, Alvarez de Cienfuegos G, Badimon L, Barja G, Battino M, Blanco A, Bonanome A, Colomer R, Corella-Piquer D, Covas I, Chamorro-Quiros J, Escrich E, Gaforio JJ, Garcia Luna PP, Hidalgo L, Kafatos A, Kris-Etherton PM, Lairon D, Lamuela-Raventos R, Lopez-Miranda J, Lopez-Segura F, Martinez-Gonzalez MA, Mata P, Mataix J, Ordovas J, Osada J, Pacheco-Reyes R, Perucho M, Pineda-Priego M, Quiles JL, Ramirez-Tortosa MC, Ruiz-Gutierrez V, Sanchez-Rovira P, Solfrizzi V, Soriguer-Escofet F, de la Torre-Fornell R, Trichopoulos A, Villalba-Montoro JM, Villar-Ortiz JR, Visioli F. indicated that
5.1. Ageing represents a great concern in developed countries because the number of people involved and the pathologies related with it, like atherosclerosis, morbus Parkinson, Alzheimer's disease, vascular dementia, cognitive decline, diabetes and cancer.
5.2. Epidemiological studies suggest that a Mediterranean diet (which is rich in virgin olive oil) decreases the risk of cardiovascular disease.
5.3. The Mediterranean diet, rich in virgin olive oil, improves the major risk factors for cardiovascular disease, such as the lipoprotein profile, blood pressure, glucose metabolism and antithrombotic profile. Endothelial function, inflammation and oxidative stress are also positively modulated. Some of these effects are attributed to minor components of virgin olive oil. Therefore, the definition of the Mediterranean diet should include virgin olive oil.
5.4. Different observational studies conducted in humans have shown that the intake of monounsaturated fat may be protective against age-related cognitive decline and Alzheimer's disease.
5.5. Microconstituents from virgin olive oil are bioavailable in humans and have shown antioxidant properties and capacity to improve endothelial function. Furthermore they are also able to modify the haemostasis, showing antithrombotic properties.
5.6. In countries where the populations fulfilled a typical Mediterranean diet, such as Spain, Greece and Italy, where virgin olive oil is the principal source of fat, cancer incidence rates are lower than in northern European countries.
5.7. The protective effect of virgin olive oil can be most important in the first decades of life, which suggests that the dietetic benefit of virgin olive oil intake should be initiated before puberty, and maintained through life.
5.8. The more recent studies consistently support that the Mediterranean diet, based in virgin olive oil, is compatible with a healthier ageing and increased longevity. However, despite the significant advances of the recent years, the final proof about the specific mechanisms and contributing role of the different components of virgin olive oil to its beneficial effects requires further investigations.(e)

B. Health Benefits according to concentration
1. Oleic acid
a. Postnatal development of the brain
In the investigation of albumin, a serum protein present in the developing brain, stimulates the synthesis of oleic acid by cultured astrocytes by inducing stearoyl-CoA 9-desaturase, the rate-limiting enzyme in oleic acid synthesis, found that oleic acid induces neuronal differentiation, as indicated by the expression of growth associated protein-43. Here, we report that the expression of growth associated protein-43 mRNA peaks at about day 7 after birth, following the maximal expression of stearoyl-CoA 9-desaturase-1 mRNA that occurs between days 3 and 5 postnatally, according to "Role of oleic acid as a neurotrophic factor is supported in vivo by the expression of GAP-43 subsequent to the activation of SREBP-1 and the up-regulation of stearoyl-CoA desaturase during postnatal development of the brain" by Velasco A, Tabernero A, Medina JM.(I)

c. Lipid and calcium content
In the classification of the influence of olive oil (00) enriched diet on the lipid content of mice brain during the early phase of liver regeneration and to test a relationship of these changes with calcium content over 21 days with diet enriched with olive oil, containing predominantly oleic acid (18:1n-9) found that monounsaturated oleic acid might interact with some metal-dependent activities that control changes in the brain during liver regeneration, according to "Effect of olive oil on brain's lipid and calcium content after partial hepatectomy in mice" by Pantović R, Tota M, Stefan L, Milin C.(III)

2. Linoleic acid
a. Weight loss
In the investigation of a diet containing conjugated linoleic acid (CLA) reduced body weight and body fat mass in the animal model as well as in human trials found that CLA is functional as an antiobesity supplement in the mouse model for postmenopausal women and that the antiobesity effect of CLA is not estrogen related, according to "Conjugated linoleic acid reduces body weight gain in ovariectomized female C57BL/6J mice" by Kanaya N, Chen S.(IV)

c. Skin diseases
In the evaluation of (+/-)-13-Hydroxy-10-oxo-trans-11-octadecenoic acid (13-HOA) of the lipoxygenase metabolites of linoleic acid (LA) from corn germ and its inhibited effect oninflammation in ears and skin, as well as tumor promotion in female ICR mice, found that 13-HOA may be a novel anti-inflammatory and antitumor chemopreventive agent with a unique mode of action, according to "Linoleic acid metabolite suppresses skin inflammation and tumor promotion in mice: possible roles of programmed cell death 4 induction" by Yasuda M, Nishizawa T, Ohigashi H, Tanaka T, Hou DX, Colburn NH, Murakami A.(VI)

2. Free radical
Oleic acid contains high amount of andioxidant that helps to improve the immune system in fighting against the forming of free radicals cause of lipid peroxidation , according to "Effect of dietary high-oleic-acid oils that are rich in antioxidants on microsomal lipid peroxidation in rats" by Perona JS, Arcemis C, Ruiz-Gutierrez V, Catalá A.(2)

3. Cholesterol
Palmitoleic acid is one of the monounsaturated fat that lowers your overall cholesterol by raising the levels of good cholesterol (HDL), according to "Effects of dietary palmitoleic acid on plasma lipoprotein profile and aortic cholesterol accumulation are similar to those of other unsaturated fatty acids in the F1B golden Syrian hamster" by Matthan NR, Dillard A, Lecker JL, Ip B, Lichtenstein AH.(3)

4. Menstrual cramps and pain
Linoleic acid is an omega 6 essential polyunsaturated fatty acid that forms the lipid component of all cell membranes in our body. Since it is balanced by linolenic acid in the olive oil, it reduces the risk of over active abdominal muscle that cause menstrual pain, according to "Metabolism of omega-6 polyunsaturated fatty acids in women with dysmenorrhea" by
Wu CC, Huang MY, Kapoor R, Chen CH, Huang YS.(4)

Side Effects
There are no known side effect, unless you are allergic to it.
Chinese Secrets To Fatty Liver And Obesity Reversal
Use The Revolutionary Findings To Achieve
Optimal Health And Loose Weight