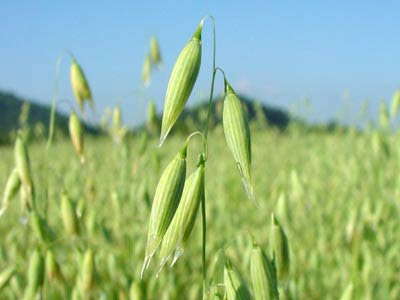 Oat
Oat is a species of cereal grain grown for its seed and was first cultivated in Europe but is now grown all over the world, especially in Scotland and England. It is one of good crop to plant in the poor soil after crops are harvested in the Fall.

Health Benefits
A. Health benefits according to studies
1. Polyphenols
In the investigation of beta-glucan of Oats and its effect in heart health found that the polyphenols of oats have also recently been shown to exhibit anti-inflammatory, antiproliferative, and anti-itching activity, which may provide additional protection against coronary heart disease, colon cancer, and skin irritation, according to "Potential health benefits of avenanthramides of oats" by Meydani M.(a)

2. Cholesterol
In the assessment of oats' contents of soluble fibers, beta-glucans and their s effect on cholesterol-lowering properties found that Oat bran supplemented to a Western diet lowers plasma cholesterol, reduces levels of some inflammatory markers, increases eNOS expression and inhibits atherosclerotic lesion development in LDLr(-/-) mice. It remains to be investigated which components in oats contribute to these effects, according to "Oats (Avena sativa) reduce atherogenesis in LDL-receptor-deficient mice" by Andersson KE, Svedberg KA, Lindholm MW, Oste R, Hellstrand P.(b)

3. Celiac disease
In the study of introduction of oats in Celiac disease, die an immune-mediated disease found that The incorporation of oats into a gluten-free diet provides high fiber and vitamin B content, increased palatability, and beneficial effects on cardiovascular health. However, it is recommended that individuals with celiac disease should have both initial and long-term assessments by a health professional when introducing pure oats into a gluten-free diet, according to "Introduction of oats in the diet of individuals with celiac disease: a systematic review" by Pulido OM, Gillespie Z, Zarkadas M, Dubois S, Vavasour E, Rashid M, Switzer C, Godefroy SB.(c)

B. Health benefits according to concentration
1. Manganese
Manganese beside is a mineral essential for energy production and metabolism of foods, it also helps to improve immune-system functioning that reduces the risk of inflammation, according to the study of "The effects of 3, 4 or 5 amino salicylic acids on manganese-induced neuronal death: ER stress and mitochondrial complexes" by Yoon H, Lee GH, Kim DS, Kim KW, Kim HR, Chae HJ., posted in PubMed (http://www.ncbi.nlm.nih.gov/pubmed/21477646 researchers indicated that the salicylate analogues and the antioxidants did not mediate ER stress in this model. The salicylate analogues reduced reactive oxygen species (ROS) and reversed the deficient mitochondrial membrane potential that was induced by Mn. Taken together, the 3, 4, 5 ASA worked in a similar way, regulating the Mn-induced mitochondrial dysfunction and protecting cells.

2. Selenium
Oat contains trace minerals selenium which is essential for the healthy function of the thyroid and immune system as it increases the antioxidant defense system by fighting against the forming of free radicals and reduce the risk of irregular cells growth causes of tumor and cancer, according to the study of "Selenium in the immune system" by Arthur JR, McKenzie RC, Beckett GJ., posted in PubMed (http://www.ncbi.nlm.nih.gov/pubmed/12730442)

3. Phosphorus
Beside providing strength to bones and teeth by working together with calcium according to the study of `[The effect of one year therapy with recombinant human growth hormone (rhGH) on growth velocity, calcium-phosphorus metabolism, bone mineral density and changes in body composition in children with growth hormone deficiency (GHD)].[Article in Polish]`by Zak T, Basiak A, Zubkiewicz-Kucharska A, Noczyńska A., posted in PubMed (http://www.ncbi.nlm.nih.gov/pubmed/20529605), it also works with riboflavin and niacin to improve the digestive system in absorbing vital nutrients.

4. Dietary fiber
Daily intake of right amount of fibers can prvent and treata. Diabetes, as Increased consumption of vegetables, whole grains, and soluble and insoluble fiber is associated with improved glucose metabolism in both diabetic and nondiabetic individuals. Improvements in insulin sensitivity and glucose homeostasis were more evident in participants following a plant-based diet compared with other commonly used diets, according to the study of "Efficacy of high-fiber diets in the management of type 2 diabetes mellitus" by Wolfram T, Ismail-Beigi F.(I)

5. Magnesium
Magnesium not only important for bone health, according to the study of "Magnesium, zinc, copper, manganese, and selenium levels in postmenopausal women with osteoporosis. Can magnesium play a key role in osteoporosis?" by Odabasi E, Turan M, Aydin A, Akay C, Kutlu M(II) but also play and important role in protecting against Alzheimer's disease, according to the study of "Altered ionized magnesium levels in mild-to-moderate Alzheimer's disease" by Barbagallo M, Belvedere M, Di Bella G, Dominguez LJ.(III)

C. Other health benefits
1. Fiber
Since it contains high levels of fiber, it reduces the risk of type II diabetes and insulin sensitive, according to the study of "Efficacy of high-fiber diets in the management of type 2 diabetes mellitus" by Wolfram T, Ismail-Beigi F., posted in PubMed(1)

2. Beta-glucanHigh levels of beta-glucan in oat, helps to reduce the risk of lung injury by reducing systemic inflammatory response, oxidative stress and lipid peroxidation in the lung tissue, pulmonary microvascular leakage, and inhibiting leukocyte infiltration into the lung tissue, according to the study of "β-Glucan protects against lung injury induced by abdominal aortic ischemia-reperfusion in rats" by Gulmen S, Kiris I, Kocyigit A, Dogus DK, Ceylan BG, Meteoglu I., posted in PubMed(2)


3. Avenanthramides
The ingredients of avenanthramides and phenolic acids in oat protect the LDL cholesterol against the forming of free radicals by inducing the functions of copper and selenium against oxidation, according to the study of "Avenanthramides and phenolic acids from oats are bioavailable and act synergistically with vitamin C to enhance hamster and human LDL resistance to oxidation" by Chen CY, Milbury PE, Kwak HK, Collins FW, Samuel P, Blumberg JB., posted in PubMed(3)

5. Magnesium
Magnesium is a powerful mineral that prevents the platelet clumping together by dilating blood vessels and reduces the risk of dangerous heart rhythms, thus decreasing the risk of cardiovascular diseases, according to the study of "Role of dietary magnesium in cardiovascular disease prevention, insulin sensitivity and diabetes" by Bo S, Pisu E., posted in PubMed(5)

Side effects1. Aveninin oat may trigger a reaction of coeliacs
2. No others are known


Super foods Library, Eat Yourself Healthy With The Best of the Best Nature Has to Offer