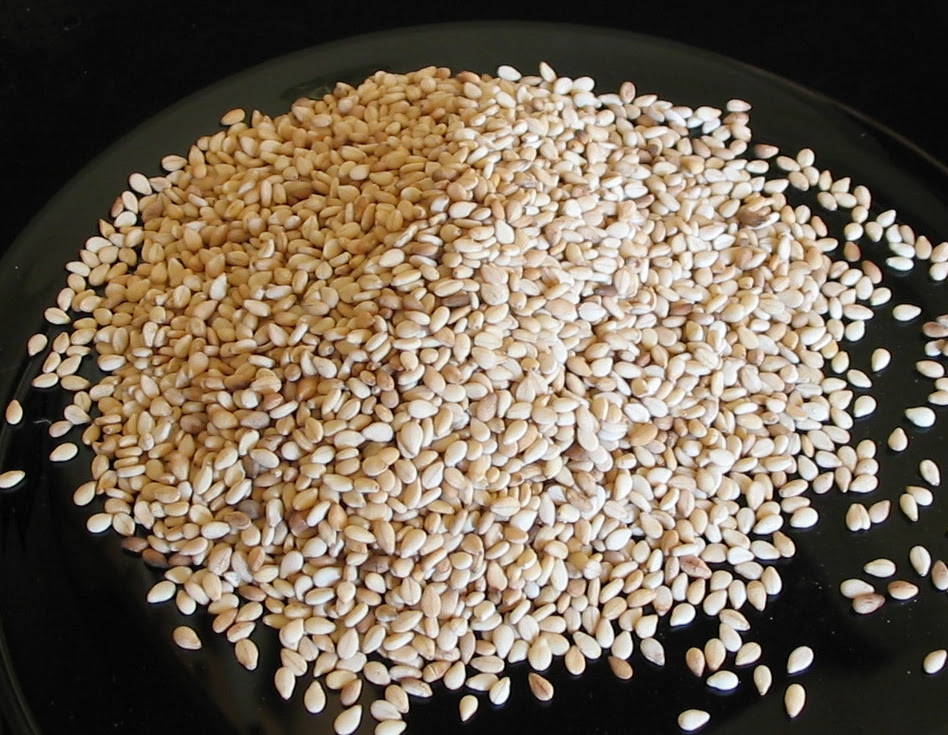 Sesame Seeds
Sesame is a species of Sesamum indicum and belong to the family of Pedaliaceae, native to to sub-saharan Africa. The tree can grow to 1.6 to 3.3 ft tall and is mainly cultivated for their seeds.

Health benefits
A. according to the studies
1. Nutritional vaues
Beside sesame is used as foods for the world population, its seed contains high amount of tryptophan and methionine and its oil is rich in linoleic and oleic acids, isomers of vitamin E and high content of fat-soluble lignans (sesamin and sesamolin) of which have exterted the properties of lowering tyhe levels of cholesterol, according to the study of "[Nutritional value of sesame seeds].[Article in Russian]" by Martinchik AN.(a)

4. Hypoxia
Sesamin and sesamolin in sesame seed has enhanced the activity in transporting oxegen to the cells and body tissues throught blood circulation, by inhibitiing MAPK pathways and exhibiting apoptosis through scavenging of ROS in hypoxia-stressed BV-2 cells, according to the study of "Protective effects of sesamin and sesamolin on murine BV-2 microglia cell line under hypoxia" by Hou RC, Wu CC, Yang CH, Jeng KC.(d)

5. Neuroprotection
Sesamolin in sesame seed has exerted the property of protection of microglia against H2O2-induced cell injury and this protection was accompanied by its inhibition of p38(mitogen-activated protein kinase) MAPK and caspase-3 activation and ROS(Reactive oxygen species) production, according to the study of "Oxidative toxicity in BV-2 microglia cells: sesamolin neuroprotection of H2O2 injury involving activation of p38 mitogen-activated protein kinase" by Hou RC, Wu CC, Huang JR, Chen YS, Jeng KC.(5)

B. Health Benefits according to the concentration
1. Copper
Beside it is best known for its function in enhancing the production of red blood cells for treaatemtyn of anemia, according to the study of " Update on anemia and neutropenia in copper deficiency" by Lazarchick J.(1), copper is alo an important trace mineral for the protection of bone density, according to the study of "The relationship of nutritional copper to the development of postmenopausal osteoporosis in rats" by Yee CD, Kubena KS, Walker M, Champney TH, Sampson HW.(2)

2. Mangannese
It is one of important trace in preventing osteroposis, according to the study of "[Study of estrogen deficiency impact on manganese levels in teeth and mandible of rats after ovariectomy]. [Article in Polish]" by Rahnama M, Błoniarz J, Zareba S, Swiatkowski W.(3)and regulating blood sugar level, according to the study of "[An inadequate intake of manganese may favour insulin resistance in girls]. [Article in Spanish]" by Rodríguez-Rodríguez E, Bermejo LM, López-Sobaler AM, Ortega RM.(4)

3. Tryptophan
Tryptophan beside is the precosur of serotonin as it is famous in inducing sleep if it taken in high dose,according to the study of "Improving the quality of infant sleep through the inclusion at supper of cereals enriched with tryptophan, adenosine-5'-phosphate, and uridine-5'-phosphate" by Cubero J, Chanclón B, Sánchez S, Rivero M, Rodríguez AB, Barriga C.(5), it also enhances the neural responses cayused by depression, according to the study of "The effects of tryptophan depletion on neural responses to emotional words in remitted depression" by Roiser JP, Levy J, Fromm SJ, Nugent AC, Talagala SL, Hasler G, Henn FA, Sahakian BJ, Drevets WC.(6)

C. Other health benefits
1. Antioxidants
Since sesame contains powerful antioxidants, including sesamol, it enhances the function of immune system in fighting against the forming of radicals caused by cell oxidation, according to the study of "Protection of cellular DNA and membrane from γ-radiation-induced damages and enhancement in DNA repair by sesamol" by Nair GG, Nair CK.(7)

2. Menstrual regulating
Calcium the fourth most abundant minerals of sesame seeds have exerted the properties in regulating the levels concentrations of total and ionized calcium, thus reduiong the risk of PMS, according to the study of "Calcium-regulating hormones across the menstrual cycle: evidence of a secondary hyperparathyroidism in women with PMS" by Thys-Jacobs S, Alvir MJ.(8)

3. Cardiovascular diseases and Cognitive functions
Since it contains high amount of unsaturated fat, it not only helps to increase the ratio for god cholesterol, thus reducing the risk of bad cholesterol forming plaque accumulated in the arterial walls that cause heart diseases, according to the study of "Omega-3 Fatty acids and cardiovascular disease: effects on risk factors, molecular pathways, and clinical events" by Mozaffarian D, Wu JH.(9), but also enhances the nervous system in information transmitting between cells and cells in other parts of the body, thus reducing the risk of nervous tension, according to the study of "Omega-3 fatty acids from fish oil lower anxiety, improve cognitive functions and reduce spontaneous locomotor activity in a non-human primate" by Vinot N, Jouin M, Lhomme-Duchadeuil A, Guesnet P, Alessandri JM, Aujard F, Pifferi F.(10)

Side Effects
1. Alergic effect for certian individual
2. Do not consume the hulls of sesame seed, because of its oxalation.
3. No other side effect is known