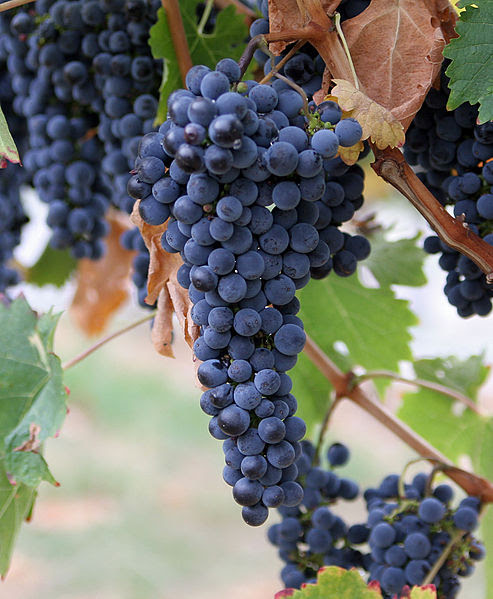 Grapes
Grape is a woody vines of the genus Vitis, belong to the family Vitaceae, native to southern Turkey.

2. Cardiovascular diseases
In the research of grapes consumption and a mild to moderate drinking of wine, particularly red wine and its effect on cardiovascular, cerebrovascular, and peripheral vascular risk, found that both wines and grapes can attenuate cardiac diseases such as atherosclerosis and ischemic heart disease. Recently, wine was also found to increase life span by inducing longevity genes. It appears that resveratrol and proanthocyanidins, especially resveratrol, present in grapes and wines play a crucial role in cardioprotective abilities of grapes and wines. according to "Grapes, wines, resveratrol, and heart health" by Bertelli AA, Das DK.(b)

3. Type 2 diabetes
In the investigation of comsuption of grapes and other fruit and theirs effect on type II diabetes
found that grapes and other fruits contain numerous polyphenols, including the stilbene resveratrol, the flavanol quercetin, catechins, and anthocyanins that have shown potential for reducing hyperglycemia, improving beta-cell function, and protecting against beta-cell loss. Therefore, with a low mean GI and GL, grapes or grape products may provide health benefits to type 2 diabetics, according to "Type 2 diabetes and glycemic response to grapes or grape products" by Zunino S.(c)

4. Hepatoprotective, cardioprotective, and renal-protective effects
In the identification of organic and conventional grapevine (Vitis labrusca L.) leaf extracts and theirs effect against hydrogen peroxide-induced stress in the liver, heart and kidney found that the beneficial effects of the V labrusca leaf extract shown in this study could probably be important for formulating dietary supplements, as well as for developing new ingredients with improved antioxidant properties from other plant sources, according to "Hepatoprotective, cardioprotective, and renal-protective effects of organic and conventional grapevine leaf extracts (Vitis labrusca var. Bordo) on Wistar rat tissues" by Oliboni LS, Dani C, Funchal C, Henriques JA, Salvador M.(d)

6. Etc.
B. According to the concentration
1. Manganese
a. sperm cryopreservation
Manganese improves the quality/fertility of semen, which will result in enhancing the successful rate in normal conception or in vitro fertilization and artificial insemination, according to the study of "Manganese provides antioxidant protection for sperm cryopreservation that may offer new consideration for clinical fertility" by Cheema RS, Bansal AK, Bilaspuri GS.(1)

b. Damage of DNA
MnTBAP or by over-expression of MnSOD have exerted the antioxidant propperties by preventing mtDNA damage and protecting mitochondrial-encoded genes of renalretinal endothelial cells, exposured to high glucose increased mtDNA(mitochondrial DNA ) damage, according to the study of "Oxidative damage of mitochondrial DNA in diabetes and its protection by manganese superoxide dismutase" by Madsen-Bouterse SA, Zhong Q, Mohammad G, Ho YS, Kowluru RA.(2)

2. Immune system
It also helps to educe the risk of irregular cell growth (causes of tumor and cancer), according to the study of "A combination of resveratrol and melatonin exerts chemopreventive effects in N-methyl-N-nitrosourea-induced rat mammary carcinogenesis" by Kisková T, Ekmekcioglu C, Garajová M, Orendáš P, Bojková B, Bobrov N, Jäger W, Kassayová M, Thalhammer T.(8) and degeneration diseases such as Parkinson's disease, According to the study of "Formation of dopamine quinone-DNA adducts and their potential role in the etiology of Parkinson's disease" by Zahid M, Saeed M, Yang L, Beseler C, Rogan E, Cavalieri EL(9) and improves the immune function in fighting against the forming of free radicals and foreign bacteria and virus invasion due the presentation of Grape phytochemicals such as resveratrol, according to the study of "The immunomodulating activities of resveratrol glucosides in humans" by Fuggetta M, Mattivi F.(10)

3. Saponins
Saponins are glucosides consisted a polycyclic aglycones attached to one or more sugar side chains. It binds with bile salt and cholesterol in the intestinal tract and secret them through waste., according to the study of "Effect of alfalfa saponins on intestinal cholesterol absorption in rats" by Malinow MR, McLaughlin P, Papworth L, Stafford C, Kohler GO, Livingston AL, Cheeke PR.(11)

4. Osteoporosis
It contains high amount of magnesium which enhances the digestive system in absorbing calcium, an essential minerals for bone health, according to the study of "A case of magnesium deficiency associated with insufficient parathyroid hormone action and severe osteoporosis" by Kanazawa I, Yamamoto M, Yamaguchi T, Yamauchi M, Yano S, Sugimoto T.(12)

5. Coagulation effect
Since it contains high amount of vitamin K, it helps to promote coagulation of blood, thus reducing the risk of excessive bleeding, according to the study of "The neonatal coagulation system and the vitamin K deficiency bleeding - a mini review" by Pichler E, Pichler L.(13)

Side Effects1. Since it contains high amount of sugar, people who has high blood sugar should consult their doctor before consuming.