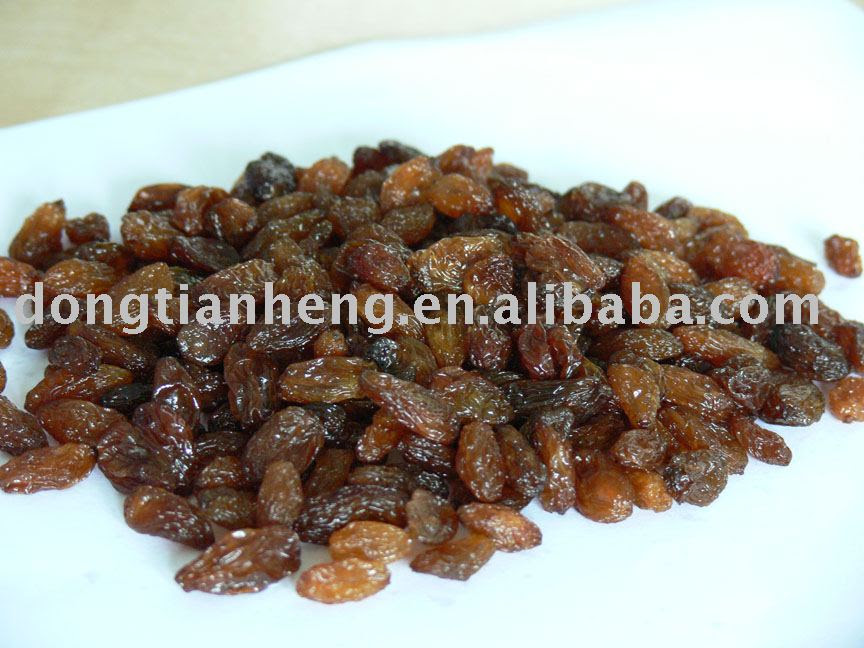 Raisins
Raisin, the dry grape by using the process of the heat of the sun or a mechanical process of oven drying, grows in many parts of the world, including many species, belong to the family Vitaceae. It is classified as A Low-Glycemic food, thus releasing glucose slowly into blood stream.


Health benefits
A. Health benefits according to studies
1. Polyphenol, phenolic acid, and tannin (PPT)
In the observation of polyphenol, phenolic acid, and tannin (PPT) of raisins and theirs effect health benefits found that in human intervention studies, raisins can lower the postprandial insulin response, modulate sugar absorption (glycemic index), affect certain oxidative biomarkers, and promote satiety via leptin and ghrelin. However, only limited numbers of studies have been performed, and it is not clear to what extent the PPT component is responsible for any effects, according to "Polyphenol content and health benefits of raisins" by Williamson G, Carughi A.(a)

3. Type II diabetes
In the analyzing the polyphenols in grape and grape product and their effects in type II diabetes
found that grapes and other fruits contain numerous polyphenols, including the stilbene resveratrol, the flavanol quercetin, catechins, and anthocyanins that have shown potential for reducing hyperglycemia, improving beta-cell function, and protecting against beta-cell loss. Therefore, with a low mean GI and GL, grapes or grape products may provide health benefits to type 2 diabetics, according to "Type 2 diabetes and glycemic response to grapes or grape products" by Zunino S.(c)

5. Immunosuppressive properties
In the research of the effects of resveratrol, a natural polyphenol found in grapes and grape products found that the immunosuppressive properties of resveratrol, which may be therapeutically useful in controlling chronic immune and/or inflammatory diseases through the down-regulation of DC differentiation and maturation, according to "Resveratrol inhibits phenotypic and functional maturation of murine bone marrow-derived dendritic cells" by

B. Health benefits according to concentration
1. ProteinProtein in Soybean is not only beneficial to the cardiovascular diseases, according to the study of "Soy protein, isoflavones, and cardiovascular health: an American Heart Association Science Advisory for professionals from the Nutrition Committee" by Sacks FM, Lichtenstein A, Van Horn L, Harris W, Kris-Etherton P, Winston M; American Heart Association Nutrition Committee(6), but also plays an important role in treating diabetes, according to "Effects of soy protein and isoflavones on glycemic control and insulin sensitivity: a 6-mo double-blind, randomized, placebo-controlled trial in postmenopausal Chinese women with prediabetes or untreated early diabetes" by Liu ZM, Chen YM, Ho SC, Ho YP, Woo J.(I)

2. Dietary fiberDaily intake of right amount of fibers can prevent and treat Diabetes. As Increased consumption of vegetables, whole grains, and soluble and insoluble fiber is associated with improved glucose metabolism in both diabetic and nondiabetic individuals. Improvements in insulin sensitivity and glucose homeostasis were more evident in participants following a plant-based diet compared with other commonly used diets, according to the study of "Efficacy of high-fiber diets in the management of type 2 diabetes mellitus" by Wolfram T, Ismail-Beigi F.(II)

3. PotassiumBeside is a important minerals for lymphatic function in regulating the body fluids, it is also essential in preventing the forming of kidney stone, according to the study of "Empiric use of potassium citrate reduces kidney-stone incidence with the ketogenic diet" by McNally MA, Pyzik PL, Rubenstein JE, Hamdy RF, Kossoff EH., posted in PubMed(http://www.ncbi.nlm.nih.gov/pubmed/19596731), researchers wrote in conclusion that Oral potassium citrate is an effective preventive supplement against kidney stones in children who receive the KD, achieving its goal of urine alkalinization. Universal supplementation is warranted.

Shahar DR, Schwarzfuchs D, Fraser D, Vardi H, Thiery J, Fiedler GM, Blüher M, Stumvoll M, Stampfer MJ, Shai I; DIRECT Group.(IIc)
5. IronBeside as a mineral in carrying life-giving oxygen to human blood cells and maintaining robust health as an essential protein component for metabolism, it also helps in synthesis of a number of essential neurotransmitters like dopamine, nor-epinephrine, along with serotonin. acccording to the study of "Brain Iron Dysregulation and the Risk of Ageing White Matter Lesions" by Gebril OH, Simpson JE, Kirby J, Brayne C, Ince PG., posted in PubMed, researchers found that The mRNA expression using QPCR suggests a pattern that favours decreased intracellular iron influx, increased ferrous oxidation and increased iron export from the cells. Iron metabolism seems to be changed in brains with WML, increased elemental iron in these brains and in turn increased production of free oxidative radicals could represent a potentiating factor for the development of ageing WML. .
6. Etc.C. Other health benefits
1. Cardivascular diseaseSince raisin contains high amount of phenols, a powerful antioxidant, it enhances the immune system awareness in fighting against the forming of free radical, thus reduce the risk of abnormal cell growth. It also prevents the oxidation of cholesterol, thereby, decreasing the risk of heart diseases and stroke, according to the study of "The polyphenol-rich extract from grape seeds inhibits platelet signaling pathways triggered by both proteolytic and non-proteolytic agonists" by Olas B, Wachowicz B, Stochmal A, Oleszek W., posted in PubMed(1)

2. ConstipationSince it also contains high amount of fiber, it promotes the movement of large intestine, thus reducing the chance of constipation, according to the study of "Fiber (glucomannan) is beneficial in the treatment of childhood constipation" by Loening-Baucke V, Miele E, Staiano A., posted in PubMed(2)

3. Oxygen transportationRaisin contains high amount of iron that helps in the production of red blood cells and formation hemoglobin that are necessary in absorbing oxygen for the body's cells need, according to the article of "Minerals", posted in VeganPeace(3)


4. Cholesterol
Since it contains high levels of Omega 3 fatty, it raises the ratio of good cholesterol, thus reducing the risk of bad cholesterol clotting and plaguing the arterial wall, causing heart diseases and stroke, according to the study of "Addressing lipid treatment targets beyond cholesterol: a role for prescription omega-3 fatty acid therapy" by Dall TL, Bays H., posted in PubMed(4)

5. Fluid regulation
Potassium in raisin helps to balance the ratio with sodium that promote the lymphatic function in regulating the fluid in the body, thus reducing the risk of water retention, according to the article of "Potassium -A key factor in maintaining health", posted in Natural health Information Center(5)

Side Effects
NO known side effect