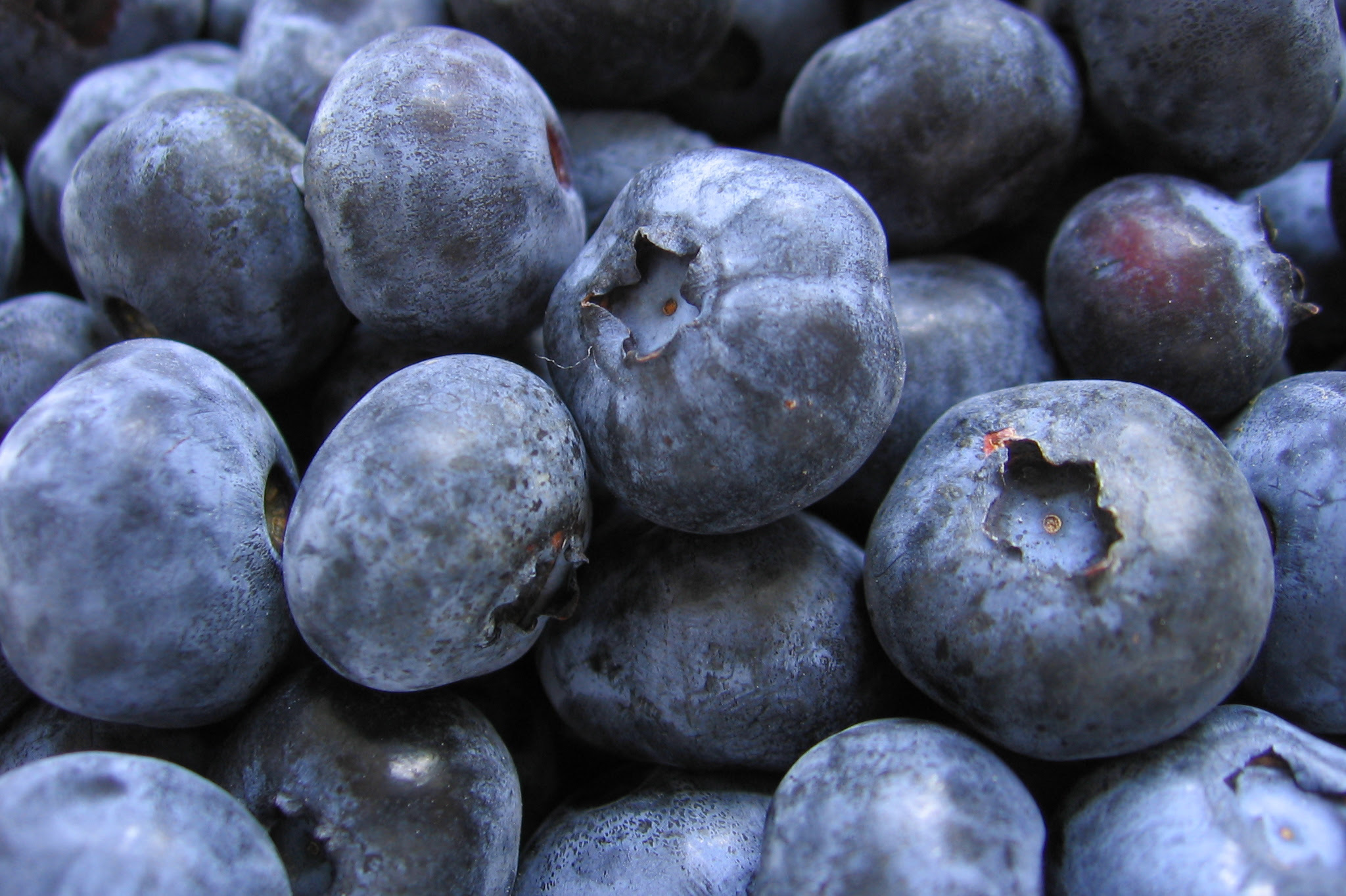 Blueberries
Blueberry is a flower plant, belong to the family Eriaceae and native to Northern America. It can grows from 10 cm to 4 metres tall.

Health Benefits
A. Health benefits according to studies
1. Antioxidant Capacity
In the investigation of Blueberry and blackberry wines commercially available in Illinois and theirs potential health benefits, found that fruit wines made from blueberries and blackberries may have potential health applications and therefore could contribute to the economy of the wine industry. Practical Application: The majority of wines are produced from grapes, but wine can also be produced from other fruits including blueberries and blackberries, which contain phenolic compounds that may contribute to human health, according to "Comparison of Chemical Composition and Antioxidant Capacity of Commercially Available Blueberry and Blackberry Wines in Illinois" by Johnson MH, Gonzalez de Mejia E.(a)

3. Anti cancers
In the assessment of Pterostilbene (trans-3,5-dimethoxy-4-hydroxystilbene) primarily found in blueberries and its anti cancer effects found that pterostilbene inhibits cancer growth through alteration of the cell cycle, induction of apoptosis, and inhibition of metastasis. In vivo, pterostilbene inhibits tumorigenesis and metastasis with negligible toxicity. Pterostilbene has also been shown to be effective as an inducer of antioxidant capacity in multiple cancer cell lines that may facilitate its function as an anticarcinogenic compound, according to "Pterostilbene and Cancer: Current Review" by McCormack D, McFadden D.(c)

4. Metabolic Syndrome
In the classification of therapeutic roles of strawberries, blueberries, and cranberries in metabolic syndrome found that strawberries lowering total and LDL-cholesterol, but not triglycerides, and decreasing surrogate biomarkers of atherosclerosis (malondialdehyde and adhesion molecules); blueberries lowering systolic and diastolic blood pressure and lipid oxidation and improving insulin resistance; and low-calorie cranberry juice selectively decreasing biomarkers of lipid oxidation (oxidized LDL) and inflammation (adhesion molecules) in metabolic syndrome, according to "Strawberries, Blueberries, and Cranberries in the Metabolic Syndrome: Clinical Perspectives" by Basu A, Lyons TJ.(d)

5. Cardiovascular diseases
In the determination of polyphenols, especially anthocyanins, micronutrients, and fiber in berries, including to chokeberries, cranberries, blueberries, and strawberries found that purified anthocyanin extracts have demonstrated significant improvements in LDL oxidation, lipid peroxidation, total plasma antioxidant capacity, dyslipidemia, and glucose metabolism. Benefits were seen in healthy subjects and in those with existing metabolic risk factors. Underlying mechanisms for these beneficial effects are believed to include upregulation of endothelial nitric oxide synthase, decreased activities of carbohydrate digestive enzymes, decreased oxidative stress, and inhibition of inflammatory gene expression and foam cell formation. Though limited, these data support the recommendation of berries as an essential fruit group in a heart-healthy diet, according to " Berries: emerging impact on cardiovascular health" by Basu A, Rhone M, Lyons TJ.(e)

B. Health benefits according to concentration
1. Vitamin KVitamin K not only plays an important role in protecting our skin from aging, it is also needed for the proper clotting of blood, thus decreasing the risk of excessive bleeding, in a study of "Delayed vitamin K deficiency as a cause of bleeding: still a concern in the 21st century!" by Kasatkar P, Shetty S, Ghosh K., posted in PubMed, researchers found that Laboratory tests confirmed acquired bleeding diathesis due to vitamin K deficiency, which was corrected after adequate vitamin K supplementation. VKDB is not an uncommon phenomenon and should be considered in the differential diagnosis of a child with bleeding diathesis.

2. ManganeseManganese beside plays an vital role for the proper and normal growth of human bone structure (accodring to the study of "Bone formation within alumina tubes: effect of calcium, manganese, and chromium dopants" by Pabbruwe MB, Standard OC, Sorrell CC, Howlett CR., posted in PubMed (http://www.ncbi.nlm.nih.gov/pubmed/15109850)), it also helps to reduce the risk of cancer, (according to the study of "The effects of 3, 4 or 5 amino salicylic acids on manganese-induced neuronal death: ER stress and mitochondrial complexes" by Yoon H, Lee GH, Kim DS, Kim KW, Kim HR, Chae HJ., posted in PubMed (http://www.ncbi.nlm.nih.gov/pubmed/21477646 researchers indicated that the salicylate analogues and the antioxidants did not mediate ER stress in this model. The salicylate analogues reduced reactive oxygen species (ROS) and reversed the deficient mitochondrial membrane potential that was induced by Mn. Taken together, the 3, 4, 5 ASA worked in a similar way, regulating the Mn-induced mitochondrial dysfunction and protecting cells.

3. Vitamin Ca. Asthma
Vitamin C is one of the key antioxidant vitamins which is abundant in the extracellular fluid lining the lung and low vitamin C intake has been associated with pulmonary dysfunction, such as asthma, according to the study of "Vitamin C supplementation for asthma" by Kaur B, Rowe BH, Arnold E.(1)

b. DNA Damage
Ascorbic acid (AA), known as vitamin C, has important antioxidant vitamin has exerted the activity in preventing (imazalil)IMA-induced cause of DNA damage, according to the stuyd of "The protective role of ascorbic acid on imazalil-induced genetic damage assessed by the cytogenetic tests' by Türkez H, Aydin E.(2)

4. Dietary fiberDaily intake of right amount of fibers can prvent and treata. Diabetes, as Increased consumption of vegetables, whole grains, and soluble and insoluble fiber is associated with improved glucose metabolism in both diabetic and nondiabetic individuals. Improvements in insulin sensitivity and glucose homeostasis were more evident in participants following a plant-based diet compared with other commonly used diets, according to the study of "Efficacy of high-fiber diets in the management of type 2 diabetes mellitus" by Wolfram T, Ismail-Beigi F.(3)

C. Other health benefits1. Cardiovascular diseases
Since blue berry contains high amount of antioxidant, it reduces ROS production and the effects of oxidative stress due to ROS, apoptosis and improve cardiac function, according to "Mitochondrially targeted antioxidants for the treatment of cardiovascular diseases" by Subramanian S, Kalyanaraman B, Migrino RQ.(I)

Side effects
1. Oxalates
Oxalates can cause health problem for people with untreated kidney and gallbadder diseases.
2. It may interfere with the absorption of calcium.
3. Cause kidney stone
4. Etc.