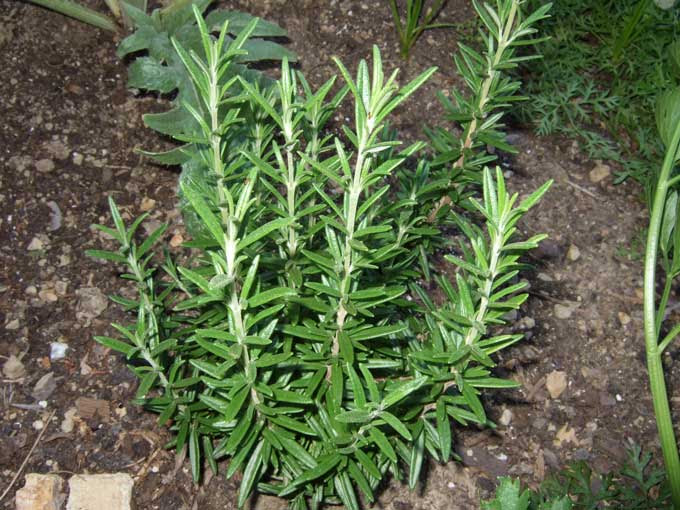 Rosemary is a perennial herb with fragrant, evergreen, needle-like leaves, the genus Rosmarinus, belonging to the family Lamiaceae. Its fresh and dried leaves has been used frequently in traditional Mediterranean cuisine and as flavor foods while barbecuing.

3. Anti-colitic activity
In the observation of the effects of rosemary leaves hydroalcoholic extract (RHE) and essential oil (REO) and their effect on inflammatory bowel diseases found that RHE and REO are both effective to possess anti-colitic activity, and reinforce the use of this plant as a remedy for inflammatory bowel diseases in traditional medicine, according to "Effects of extract and essential oil of Rosmarinus officinalis L. on TNBS-induced colitis in rats" by
Minaiyan M, Ghannadi AR, Afsharipour M, Mahzouni P.(c)

5. Cancer prevention
In the research of intake of vegetables and certain plant components and their major role in cancer risk reduction indicated that literature evidence from animal and cell culture studies demonstrates the anticancer potential of rosemary extract, carnosol, carnosic acid, ursolic acid, and rosmarinic acid and concluded the different molecular targets modulated by rosemary and its active constituents are useful indicators of success in clinical cancer chemo-prevention trials, according to "Rosemary and cancer prevention: preclinical perspectives" by
Ngo SN, Williams DB, Head RJ.(e)

B. Health benefits according to concentration
1. Dietary fiber
Daily intake of right amount of fibers can prvent and treata. Diabetes, as Increased consumption of vegetables, whole grains, and soluble and insoluble fiber is associated with improved glucose metabolism in both diabetic and nondiabetic individuals. Improvements in insulin sensitivity and glucose homeostasis were more evident in participants following a plant-based diet compared with other commonly used diets, according to the study of "Efficacy of high-fiber diets in the management of type 2 diabetes mellitus" by Wolfram T, Ismail-Beigi F.(1)

2. Iron
Iron helps to enhances the production of red blood cells and formation of hemoglobin, that enhance in adsorption of oxygen from the lung and carry nutrients to all body cells, according to the study of "[Iron deficiency and overload. Implications in oxidative stress and cardiovascular health].[Article in Spanish]" by Toxqui L, De Piero A, Courtois V, Bastida S, Sánchez-Muniz FJ, Vaquero MP., posted in PubMed, (http://www.ncbi.nlm.nih.gov/pubmed/20593115)

3. Calcium
In the investigation of micronutrients, calcium (Ca) and inorganic (i) phosphate (P) ,the two main constituents of hydroxyapatite and theirs effect on bone health found that they are endowed with a transport system that accumulates Pi inside the matrix vesicles, followed by the influx of Ca ions. This process leads to the formation of hydroxyapatite crystal and its subsequent association with the organic matrix collagen fibrils. In addition to this structural role, both Ca and Pi positively influence the activity of bone-forming and bone-resorbing cells. Pi plays a role in the maturation of osteocytes, the most abundant cells in bone. Osteocytes are implicated in bone mineralization and systemic Pi homeostasis, according to "Calcium and phosphate: a duet of ions playing for bone health" by Bonjour JP.(2)

4. Vitamin A
As famous in improving eye sight, vitamin A also plays an important role in enhancing immune system fighting against the forming of free radicals that cause tissue, muscle and cellular damage and infection, according to the study of "Vitamin A, immunity, and infection" by Semba RD., posted in PubMed (http://www.ncbi.nlm.nih.gov/pubmed/21775644), researchers found that vitamin A and its metabolites are immune enhancers that have been shown to potentiate antibody responses to T cell-dependent antigens, increase lymphocyte proliferation responses to antigens and mitogens, inhibit apoptosis, and restore the integrity and function of mucosal surfaces. Vitamin A and related retinoids may have potential applications in therapy for some infectious diseases.

5. Folate
In the investigation of the prevalence and multifactorial etiology of anemia among Indian human immunodeficiency virus (HIV)-infected children and its effect on anemia, found that Anemia, particularly iron deficiency anemia and anemia of inflammation, is highly prevalent among children with HIV infection. Micronutrient supplements (iron and, folate) combined with ART(antiretroviral therapy) improved anemia in HIV-infected children, according to "The prevalence and etiology of anemia among HIV-infected children in India" by Shet A, Arumugam K, Rajagopalan N, Dinakar C, Krishnamurthy S, Mehta S, Shet AS.(3)

6. Vitamin C
a. Asthma
Vitamin C is one of the key antioxidant vitamins which is abundant in the extracellular fluid lining the lung and low vitamin C intake has been associated with pulmonary dysfunction, such as asthma, according to the study of "Vitamin C supplementation for asthma" by Kaur B, Rowe BH, Arnold E.(4)
b. DNA Damage
Ascorbic acid (AA), known as vitamin C, has important antioxidant vitamin has exerted the activity in preventing (imazalil)IMA-induced cause of DNA damage, according to the stuyd of "The protective role of ascorbic acid on imazalil-induced genetic damage assessed by the cytogenetic tests' by Türkez H, Aydin E.(5)

C. Other health benefits
1. Free radicals
Rosemary contains high amount of carnosic acid, a natural benzenediol diterpene which has found to reduce the risk of free radical cause of cancers, according to "Inhibitory effects of rosemary extracts, carnosic acid and rosmarinic acid on the growth of various human cancer cell lines" by Yesil-Celiktas O, Sevimli C, Bedir E, Vardar-Sukan F.(I)

2. Immune system
Since it also contains high amount of vitamin A, C and E, the team of common antioxidant scavengers that help to promote the immune function in fighting against irregular cell growth and virus cause of inflammation due to counter reaction in the attack of free radicals, Part C. Common antioxidants (scavengers) -Antioxidants - Cancers and Diseases (II)

5. Caffeic acid phenethyl ester
Caffeic acid found in rosemary is a hydroxycinnamic acid that has been shown to have the immunoregulatory effects on cytokine secretion of peripheral blood mononuclear cells (PBMCs) from asthmatic children, according to "The immunoregulatory effects of caffeic Acid phenethyl ester on the cytokine secretion of peripheral blood mononuclear cells from asthmatic children" by Sy LB, Yang LK, Chiu CJ, Wu WM.(V)
6. Etc.

Side effects
1. Rosemary essential oil is potentially toxic if ingested
2. May cause allergic effect to certain people
3.Overdose of rosemary leaves can cause adverse reactions
4. Etc.
Chinese Secrets To Fatty Liver And Obesity Reversal
Use The Revolutionary Findings To Achieve
Optimal Health And Loose Weight