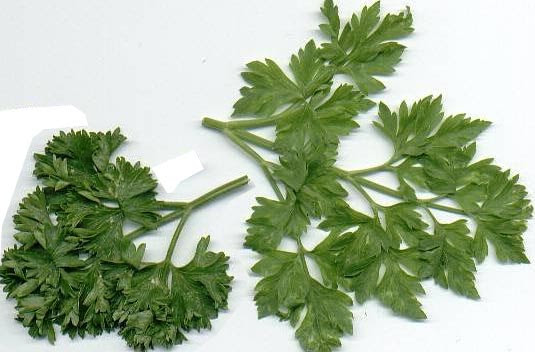 Health Benefits
1. Diuretic effects
In the determination of diuretic effect of parsley in folk medicine found that Parsley extract, was shown on the other hand, to reduce the activity of the Na+-K+ ATPase in both cortex and medulla homogenates. Such an inhibition would decrease apical cellular Na+ reabsorption, lower K+ secretion, increase K+ concentration in the intercellular space and consequently would inhibit passive K+ influx across the tight junctions, according to "Diuretic effect and mechanism of action of parsley" by Kreydiyyeh SI, Usta J.(1)

2. Laxative effects
In the identification of Parsley' laxative properties claimed in folk medicine found that when parsley and furosemide were added together, net water absorption was significantly higher than with parsley alone and significantly lower than with furosemide alone. In addition, parsley extract was shown to inhibit the in vitro activity of the Na+-K+ATPase in a colon homogenate and the activity of a partially purified dog kidney ATPase. The results suggest that parsley acts by, inhibiting sodium and consequently water absorption through an inhibition of the Na+-K+ pump, and by stimulating the NaKCl, transporter and increasing electrolyte and water secretion, according to "The mechanism underlying the laxative properties of parsley extract" by Kreydiyyeh SI, Usta J, Kaouk I, Al-Sadi R.(2)

4. Hepatotoxicity
In the investigation of the effects of parsley (2g/kg) and glibornuride (5mg/kg) on the liver tissue of streptozotocin-induced diabetic rats, found that The diabetic group, given glibornuride, blood glucose, serum alkaline phosphatase activity, serum sialic acid, uric acid, potassium, and liver NEG levels decreased, but liver LPO, GSH, serum sodium levels, and body weight increased. It was concluded that probably, due to its antioxidant property, parsley extract has a protective effect comparable to glibornuride against hepatotoxicity caused by diabetes, according to "Effects of parsley (Petroselinum crispum) extract versus glibornuride on the liver of streptozotocin-induced diabetic rats" by Ozsoy-Sacan O, Yanardag R, Orak H, Ozgey Y, Yarat A, Tunali T(4)

6. Haemostasis
In the study of the aqueous extract (Pc) of Petroselinum crispum (Mill) and its effects haemostasis, found that Pc, apigenin and cosmosiin interfere on haemostasis inhibiting platelet aggregation. To the best of our knowledge this is the first report for the cosmosiin antiplatelet aggregation in vitro activity, according to "Phenolic chemical composition of Petroselinum crispum extract and its effect on haemostasis" by Chaves DS, Frattani FS, Assafim M, de Almeida AP, de Zingali RB, Costa SS.(6)

7. Antimicrobial effects
In the study of the effect of cayenne, green pepper, parsley, and dill to Kareish cheese and to evaluate the antimicrobial activity of these plant materials against natural microflora, coliforms, molds, and Staphylococcus aureus, found that kareish cheese prepared with 1% cayenne pepper and 3% and 6% each of green pepper, dill, and parsley were found strongly acceptable to the consumer and considered the most preferable type. Therefore, this study revealed that pepper, parsley, and dill exhibited antibacterial activity against natural microflora, coliforms, yeast and molds, and S. aureus in Kareish cheese, and the addition of these plants is acceptable to the consumer and may contribute to the development of new and safe varieties of Kareish cheese, according to "Antimicrobial effects of pepper, parsley, and dill and their roles in the microbiological quality enhancement of traditional Egyptian Kareish cheese" by Wahba NM, Ahmed AS, Ebraheim ZZ.(7)

8. Platelet aggregation and prolongs bleeding
In the determination of parsley (Petroselinum crispum, Apiaceae) used in In Morocco, used to treat cardiovascular diseases such as arterial hypertension, found that The oral administration of CAE (3g/kg) inhibited significantly (p<0.001) platelet aggregation ex vivo and prolonged bleeding time (p<0.001) without changes in the platelet amount. The prolongation of bleeding time by CAE may be attributed to the observed inhibition of platelet aggregation. These effects could be related in part to the polyphenolic compounds present in the extract. These results support the hypothesis that the dietary intake of parsley may be benefit in the normalization of platelet hyperactivation, in the nutritional prevention of cardiovascular diseases and are potentially interesting in the development of new prevention strategies, according to "Parsley extract inhibits in vitro and ex vivo platelet aggregation and prolongs bleeding time in rats" by Gadi D, Bnouham M, Aziz M, Ziyyat A, Legssyer A, Legrand C, Lafeve FF, Mekhfi H.(8)

9. Spasmolytic effect
In the investigation of Traditional herbal medicines such as Petroselinum crispum (Parsley) used for treatment of intestinal disorders in Iran, found that adding extract before influence of KCl, cause reduced effect of KCl (n = 7, p < 0.001). In addition, the Tyrode solution without CaCl2 and high concentration of K+, various concentration of extract significantly (n = 7, p < 0.001) decreased the CaCl2-induced contraction. Therefore, it seems that the relaxation effect of extract alcoholic parsley seed on the contraction of ileum is performed by blocking of voltage-gated calcium channels, according to "Spasmolytic effect of Petroselinum crispum (Parsley) on rat's ileum at different calcium chloride concentrations" by

10. Cognitive effects
In the testinbg Aqueous and methanolic extracts of 11 plants and 3 Corydalis species, including parsley used in Danish folk medicine for improvement of memory and cognition, found that the extracts exhibited moderate inhibition of the enzyme, defined as more than 15% at 0.1 mg/ml, according to "Screening of plants used in Danish folk medicine to treat memory dysfunction for acetylcholinesterase inhibitory activity" by Adsersen A, Gauguin B, Gudiksen L, Jäger AK.(10)

11. Antiulcerogenic activity
In the demonstartion of An ethanolic extract of Parsley, Petroselinum crispum (Mill.) Nym.ex A.W. Hill (Umbelliferae) and its ability to inhibit gastric secretion and to protect gastric mucosa against the injuries caused by pyloric ligation, hypothermic restraint stress, indomethacin and cytodestructive agent, found that The extract in doses of 1 and 2 g/kg body weight had a significant antiulcerogenic activity on the models used. Besides, ethanol-induced depleted gastric wall mucus and non-protein sulfhydryl contents were replenished by pretreatment with Parsley extract, according to "Prevention of experimentally-induced gastric ulcers in rats by an ethanolic extract of "Parsley" Petroselinum crispum" by Al-Howiriny T, Al-Sohaibani M, El-Tahir K, Rafatullah S.(11)

Side Effects
1. The herb may cause allergic effect to certain people such as skin rash
2. Overdoses may cause kidney or liver damage due to measurable amounts of oxalates in Parsley
3. Do not use the herb in children or if you are pregnant without approval from the the related field specialist as parsley may cause uterine contraction of that can increase the risk of bleeding.
4. Overdoses of parley oil can be toxic and liver damaging.
5. Etc.