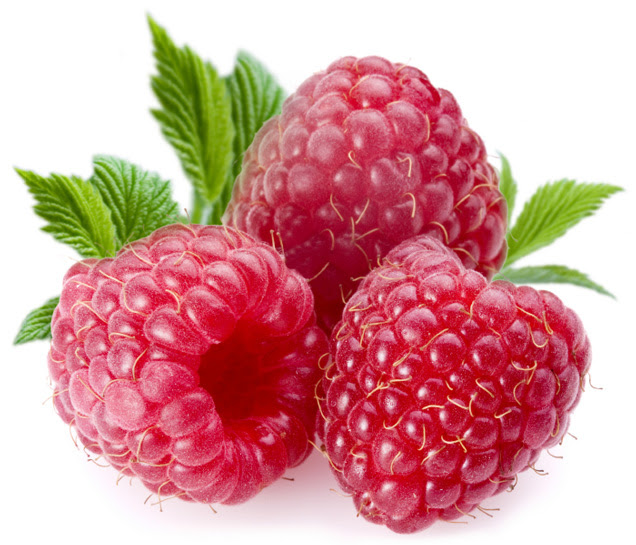 Raspberries are perennial, the edible fruit of a multitude of plant species in the genus Rubus belong to the family Rosaceae, originated from Europe. Because of their commercial values and health benefits, they have been grown for processing of quick frozen (IQF) fruit, purée, juice, or as dried fruit used in a variety of grocery products.

4. Intestinal tumorigenesis
In the observation of Freeze-dried black raspberries (BRB)and its effect on intestinal carcinogenesis found that BRBs inhibit tumor development in Apc1638+/- mice by suppressing β-catenin signaling and in Muc2-/- mice by reducing chronic inflammation. Intestinal cell proliferation was inhibited by BRBs in both animal models; however, the extent of mucus cell differentiation was not changed in either model. Collectively, our data suggest that BRBs are highly effective in preventing intestinal tumor development in both Apc1638+/- and Muc2-/- mice through targeting multiple signaling pathways, according to "Black raspberries inhibit intestinal tumorigenesis in apc1638+/- and Muc2-/- mouse models of colorectal cancer" by Bi X, Fang W, Wang LS, Stoner GD, Yang W.(d)

6. Etc.
B. Health benefits according to concentration
1. Vitamin CIn the evaluation of pulmonary dysfunction. and it effects on pulmonary dysfunction found that At present, evidence from randomised-controlled trials is insufficient to recommend a specific role for vitamin C in the treatment of asthma. Further methodologically strong and large-scale randomised controlled trials are needed in order to address the question of the effectiveness of vitamin C in children with asthma but some outcome data showed effectiveness on lung function, symptom scores, IgE levels and inhaled steroid use. One small study showed a significant difference in % drop in FEV1 post-exercise, according to the study of "Vitamin C supplementation for asthma" by Kaur B, Rowe BH, Arnold E.(1)

2. Manganese
Manganese beside is a mineral essential for energy production and metabolism of foods, it also helps to improve immune-system functioning that reduces the risk of inflammation, according to the study of "The effects of 3, 4 or 5 amino salicylic acids on manganese-induced neuronal death: ER stress and mitochondrial complexes" by Yoon H, Lee GH, Kim DS, Kim KW, Kim HR, Chae HJ., posted in PubMed (http://www.ncbi.nlm.nih.gov/pubmed/21477646 researchers indicated that the salicylate analogues and the antioxidants did not mediate ER stress in this model. The salicylate analogues reduced reactive oxygen species (ROS) and reversed the deficient mitochondrial membrane potential that was induced by Mn. Taken together, the 3, 4, 5 ASA worked in a similar way, regulating the Mn-induced mitochondrial dysfunction and protecting cells.

3. Dietary Fibers
Daily intake of right amount of fibers can prvent and treata. Diabetes, as Increased consumption of vegetables, whole grains, and soluble and insoluble fiber is associated with improved glucose metabolism in both diabetic and nondiabetic individuals. Improvements in insulin sensitivity and glucose homeostasis were more evident in participants following a plant-based diet compared with other commonly used diets, according to the study of "Efficacy of high-fiber diets in the management of type 2 diabetes mellitus" by Wolfram T, Ismail-Beigi F.(2)

5. Magnesium
Magnesium not only important for bone health, according to the study of "Magnesium, zinc, copper, manganese, and selenium levels in postmenopausal women with osteoporosis. Can magnesium play a key role in osteoporosis?" by Odabasi E, Turan M, Aydin A, Akay C, Kutlu M(4) but also play and important role in protecting against Alzheimer's disease, according to the study of "Altered ionized magnesium levels in mild-to-moderate Alzheimer's disease" by Barbagallo M, Belvedere M, Di Bella G, Dominguez LJ.(5)

C. Other health benefits
1. Anthocyanin
Anthocyanin pigments that produces the red color of the fruit, are assembled like all other flavonoids that inhibit the promotion and progression of tumor and cells by accelerating the rate of cell turnover effectively making the cancer cells die faster, according to the study of "Anticancer activities of an anthocyanin-rich extract from black rice against breast cancer cells in vitro and in vivo" by Hui C, Bin Y, Xiaoping Y, Long Y, Chunye C, Mantian M, Wenhua L., posted in PebMed (http://www.ncbi.nlm.nih.gov/pubmed/21058201)
2. Antioxidant
Vitamin C or ascorbic acid is a powerful antioxidant which inhibits the forming of the free radical due to oxidative stress. It also enhances the function of immune system in guarding our body against foreign invasion, thus reducing the risk of inflammatory and infectious diseases, according to the study of "Role of ascorbic acid in scavenging free radicals and lead toxicity from biosystems" by Tariq SA., posted in PubMed (http://www.ncbi.nlm.nih.gov/pubmed/17914166)

3. Ellagic acid
Ellagic acid in raspberries helps to prevent unwanted damage to cell membranes caused by oxidative free radicals by directly inhibiting the DNA binding of certain carcinogens, According to the article of “BIOLOGICAL FUNCTIONALITY OF ELLAGIC ACID: A REVIEW” by D.A. VATTEM and K. SHETTY , Article first published online: 30 JUN 2005, posted in Wiley Online Library, researchers indicated that in abstract, in this article, we have revised the existing models and have proposed a comprehensive model for the antioxidant response-linked mechanism of the action of ellagic acid from fruits at the early stages of host cellular response by the modulation of enzyme response to maintain cellular homeostasis in eukaryotes and by inhibiting the survival in pathogenic prokaryotes.

4. Mucular Degeneration
Muscular degeneration is a medical condition of aging, causing a loss of vision in the center of the visual field. Antioxidant such as vitamins and zinc reduce the risk of the diseases from vision loss due to aging, according to the study of "Age-related macular degeneration" by Coleman HR, Chan CC, Ferris FL 3rd, Chew EY., posted in PubMed (http://www.ncbi.nlm.nih.gov/pubmed/19027484), researchers wrote in abstract that Treatment with antioxidant vitamins and zinc can reduce the risk of developing advanced age-related macular degeneration by about a quarter in those at least at moderate risk.
5. Bone structure
Manganese beside is an essential for proper and normal growth of human bone structure by increasing the mineral density of spinal bone, it also prevents the damage of oxidation cause of pulmonary hypertension and respiratory distress syndrome, according to the study of "Cell-specific expression of manganese superoxide dismutase protein in the lungs of patients with respiratory distress syndrome, chronic lung disease, or persistent pulmonary hypertension" by Asikainen TM, Heikkilä P, Kaarteenaho-Wiik R, Kinnula VL, Raivio KO., posted in PubMed (http://www.ncbi.nlm.nih.gov/pubmed/11536448)
6. Constipation
Dietary fiber helps to increase the size and soften the stool, thus reducing the risk of constipation, according to the study of "A dietary fiber mixture versus lactulose in the treatment of childhood constipation: a double-blind randomized controlled trial" by Kokke FT, Scholtens PA, Alles MS, Decates TS, Fiselier TJ, Tolboom JJ, Kimpen JL, Benninga MA., posted in PubMed (http://www.ncbi.nlm.nih.gov/pubmed/18979582). Since it is hard to digest, it makes out stomach feeling full longer, resulting in weight loss, according to the study of 'Whole-grain ready-to-eat oat cereal, as part of a dietary program for weight loss, reduces low-density lipoprotein cholesterol in adults with overweight and obesity more than a dietary program including low-fiber control foods" by Maki KC, Beiseigel JM, Jonnalagadda SS, Gugger CK, Reeves MS, Farmer MV, Kaden VN, Rains TM., posted in PubMed (http://www.ncbi.nlm.nih.gov/pubmed/20102847)

Side effects
1. Oxalation
Oxalates can become too concentrated in body fluids, if eaten in large amount.
2. Etc.